You are here: Home › News › “Shocking” Pesticide Levels Found In Beehives
By Will Parker on August 19, 2008 in News 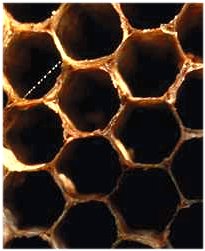 An analysis by Penn State researchers of beehive wax has shown unprecedented levels of fluvalinate and coumaphos – pesticides used in the hives to combat varroa mites – in all hive samples. The researchers also found lower levels of 70 other pesticides (used to protect agricultural crops) and metabolites of those pesticides in pollen and bees.

“Everyone figured that the acaricides (anti-varroa mite chemicals) would be present in the wax because the wax is reprocessed to form the structure of the hives. It was a bit of a shock to see the levels and the widespread presence of these [other] pesticides,” Penn’s Maryann Frazier told the 236th American Chemical Society meeting.

All of the bees tested showed at least one pesticide and pollen averaged six pesticides with as many as 31 in a sample. But Frazier is cautious about associating the high levels of pesticide residue with Colony Collapse Disorder. “We do not know that these chemicals have anything to do with Colony Collapse Disorder, but they are definitely stressors in the home and in the food sources,” explains Frazier. “Pesticides alone have not shown they are the cause of CCD. We believe that it is a combination of a variety of factors, possibly including mites, viruses and pesticides.”

While contaminated wax can be treated using irradiation, reducing the bees’ exposure to external pesticides is far more difficult. Perhaps most worryingly, with the large number of pesticides found in bees and pollen, interactions are likely. “We are finding fungicides that function by inhibiting the steroid metabolism in the fungal diseases they target, but these chemicals also affect similar enzymes in other organisms,” says Frazier. “These fungicides, in combination with pyrethroids and/or neonicotinoids can sometimes have a synergistic effect 100s of times more toxic than any of the pesticides individually.”

Frazier also notes that it is difficult to observe bees outside the hive. The U.S. EPA only looks at acute exposure to individual pesticides, but chronic exposure may cause behavioral changes that are unmonitored. The researchers now want to look at small versus large beekeeping operations and organic versus nonorganic operations to see what, if any, are the differences in exposure.

Bio-Engineered Yeast Cranks Out Pharmaceuticals
Melanoma Not Without Benefits