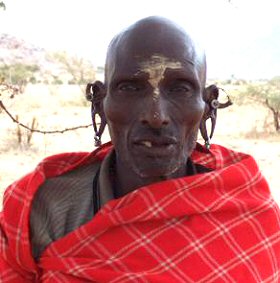 A fascinating new study in the journal BMC Evolutionary Biology suggests that attention deficit hyperactivity disorder (ADHD) might be beneficial to nomadic Kenyan tribesmen in Africa, while possibly leading to malnourishment in their settled cousins.

Led by Dan Eisenberg, an anthropologist from Northwestern University, the study looked at occurrences of the ADHD-associated version of the dopamine receptor D4 gene (DRD4) in Ariall tribesmen and then correlated body mass index and height with variants of the DRD4 gene. One version of the DRD4 gene, the “7R allele,” is believed to be associated with food craving as well as ADHD. “This gene is likely to be involved in impulsivity, reward anticipation and addiction,” explained Eisenberg.

By studying adult tribesmen, some of whom still live as nomads while others live in settlements, the research team probed whether this association would have the same implications in the different environments.

Intriguingly, while those with the DRD4/7R allele were better nourished in the nomadic population, they were less well-nourished in the settled population. Although the effects of different versions of dopamine genes have previously been studied in Western nations, very little research has been carried out in subsistence environments like the areas where the Ariaal live, despite the fact that such environments may be more comparable to the environments where much early human evolution took place.

“The DRD4/7R allele has been linked to greater food and drug cravings, novelty-seeking, and ADHD symptoms. It is possible that in the nomadic setting, a boy with this allele might be able to more effectively defend livestock against raiders or locate food and water sources, but that the same tendencies might not be as beneficial in settled pursuits such as focusing in school, farming or selling goods,” speculated Eisenberg.

The findings suggest that behavioral differences previously associated with the DRD4 gene, such as ADHD, are more or less effective depending on the environment. Eisenberg is planning further research into how this might manifest in Ariaal children in the near future.

A+ BIG SELECTION OF ROCKS AND CRYSTALS A+