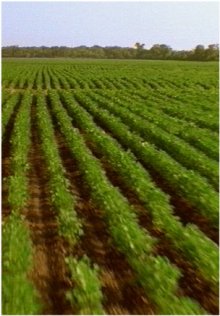 We’ve all heard how biofuel crops and changing weather patterns are affecting food supplies, but a scientist from the University of Massachusetts Amherst (UM) believes that there may be a more insidious threat – ozone.

While the ozone layer high in the atmosphere helps protect us from the sun’s radiation, ozone at lower levels is regarded as a pollutant, contributing to respiratory problems and other ailments in humans. In food crops like soy and wheat the effects include damage to foliage and reduced crop yields. Ozone is produced when unstable organic compounds in exhaust fumes and industrial emissions break down.

“Plants are much more sensitive to ozone than people and a slight increase in exposure can have a large impact on their productivity,” noted UM’s William Manning, a professor of plant, soil and insect sciences. “The new ozone standard set by the U.S. EPA in March 2008 is based on protecting human health, and may not be strict enough to protect plants.”

According to Manning, emission controls on cars have been successful in reducing the short periods of high ozone levels called peaks, but average concentrations of ozone in the atmosphere throughout the year (the background level) are increasing as polluted air masses from Asia travel to the US.

Manning’s research involved studying how ozone levels in the Yangtze Delta affect the growth of oilseed rape, a member of the cabbage family that produces one-third of the vegetable oil used in China. By growing the plants in chambers that controlled the ozone environment, Manning’s team showed that exposure to elevated ozone reduced the size and weight of the plants by 10 – 20 percent. The production of seeds and oil was also reduced.

Manning also experimented with different plants and found that wheat was more sensitive to ozone than rice and that the most sensitive species overall were from the legume and cabbage families.

Plants themselves can limit ozone damage by reducing the size of the pores on their leaves which reduces the uptake of ozone. But such damage control also limits the uptake of carbon dioxide, which is used by plants in the process of photosynthesis. Consequently, chronic exposure results in reduced photosynthesis, plant growth and yields. In the long term, leaf injury occurs when the amount of ozone taken in exceeds the leaf’s capacity to provide antioxidants to counter its effects.

Manning next plans to study the effects of ozone on a variety of plants in the Pioneer Valley of Massachusetts, where ozone levels are often above the EPA standard as pollution from New York City and Washington, D.C. moves northward during the day.

Related:
Ozone – The Pollutant That Got Away
Ethanol Vehicles A Health Hazard
Effects Of Air Pollution On Health Vastly Underrated
Crop Yields Set To Plunge
Down On The Farm: Yields, Nutrients And Soil Quality

Moon Dust Could Be Key Ingredient For Giant Lunar Telescope
ADHD A Benefit In The Wild?