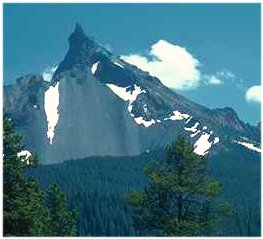 Trees and shrubs in parts of northern Canada are taking over what were once tundra landscapes at a much faster speed than scientists originally thought, according to a new University of Alberta (UA) study. The researchers involved say that the rapid northward advance of the treeline adds to the growing body of evidence supporting a warming planet.

With increasing temperatures, scientists had expected a reduction in tundra, but the new research shows that this shift will not always occur gradually, and can surge ahead. “The conventional thinking on treeline dynamics has been that advances are very slow because conditions are so harsh at these high latitudes and altitudes,” said UA’s Dr. Ryan Danby. “But what our data indicates is that there was an upslope surge of trees in response to warmer temperatures. It’s like it waited until conditions were just right and then it decided to get up and run, not just walk.”

Using tree rings, Danby and his co-researchers reconstructed changes in treeline forests in the southwestern Yukon over the past 300 years.

The team found that a rapid change in response to climate warming during the early mid 20th century was observed at all locations. Treeline advanced considerably – as much as 85 meters elevation – on warm, south-facing slopes and tree density increased significantly – as much as 65 per cent – on cooler, north-facing slopes.

“The mechanism of change appears to be associated with occasional years of extraordinarily high seed production – triggered by hot, dry summers – followed by successive years of warm temperatures favorable for seedling growth and survival,” explained Danby.

An advancing treeline could have a significant impact on tundra habitats and the species they host. “The problem is that in mountainous areas you can only go so high, so they get forced into smaller and smaller areas,” said Danby.

Worryingly, as the treeline advances, the reflectance of the land surface declines because coniferous trees absorb more sunlight than the tundra. This light energy is then re-emitted to the atmosphere as heat. This sets up a positive feedback effect, the same process that is associated with the rapidly decaying Arctic ice cap.

Birds Serve Seduction Apprenticeship
Is Your Carpet Making You Fat?