You are here: Home › News › Birds Serve Seduction Apprenticeship
By Will Parker on March 6, 2007 in News 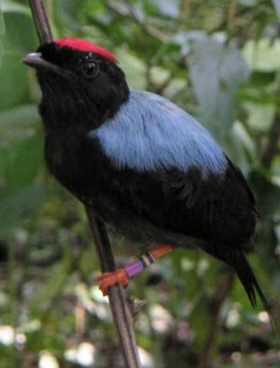 Demonstrations of altruism and selfless behavior in the animal kingdom have long puzzled evolutionary biologists. Why do some individuals sacrifice their own self-interest to help others? Emily DuVal, a UC Berkeley zoologist, believes that in the case of the tropical bird known as the lance-tailed manakin, it’s because there may be a long-term payoff.

DuVal was intrigued as to why the subordinate beta males should cooperate in this courting behavior when there doesn’t appear to anything in it for them. To investigate, she color-banded and observed wild lance-tailed manakins in Panamá over several years to follow changes in their status. She also used genetic analyses to determine chicks’ paternity and their genetic relationship to the adults.

Her findings, published in The American Naturalist, showed that beta males became alphas more often than other males, but not necessarily at the same territory where they were betas. Even when the local alpha slot was empty, some betas moved to be “helpers” elsewhere rather than take over the vacant alpha position. “Without being an alpha, there’s essentially no chance for these males to reproduce,” says DuVal. “My results suggest that betas could actually benefit from staying betas for a while, [and] gaining courtship skills during a sort of apprenticeship.”

DuVal’s results contrast with those from studies of other birds with cooperative courtship behaviors: wild turkeys strut cooperatively with close relatives, and ruffs (a shorebird) form alliances of males that often both mate while they are partners. “These contrasts are interesting because they show that similar behavior can result from very different social and selective environments,” she concluded.