You are here: Home › News › Organic Molecules Coaxed Into Thermoelectric Generation
By Will Parker on February 16, 2007 in News 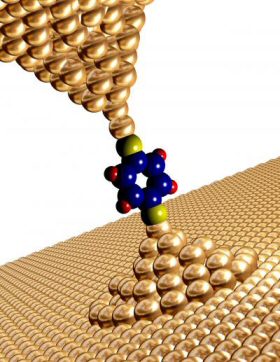 A tiny contraption made by trapping organic molecules between metal nanoparticles has successfully generated electricity from heat; an achievement that the researchers believe could lead to more efficient ways to directly convert heat into electricity.

Around 90 percent of the world’s electricity is created through the indirect conversion of heat, but inefficient conversion means that a great deal of heat is wasted and released. “Generating 1 watt of power requires about 3 watts of heat input and involves dumping into the environment the equivalent of about 2 watts of power in the form of heat,” said lead researcher Arun Majumdar, of the University of California, Berkeley, where the discovery was made. “If even a fraction of the lost heat can be converted into electricity in a cost-effective manner, the impact it would have on energy can be enormous, amounting to massive savings of fuel and reductions in carbon dioxide emissions.”

Capturing and utilizing wasted heat has traditionally been accomplished using thermoelectric converters. These employ a simple method of generating electricity known as the Seebeck effect, a phenomenon in which a voltage is created when the junctions of two different metals are kept at different temperatures. But these types of thermoelectric generators operate at only a measly 7 percent efficiency, and they are made up of exotic metal alloys, making them too costly and impractical for widespread use.

The new work, appearing in Science, marks the first time the Seebeck effect has been measured in an organic molecule, laying the groundwork for the development of more cost-effective thermoelectric converters. “The goal is to make things out of materials that are more abundant and more easily processed,” said co-researcher Rachel Segalman. “Organics are cheap and can be processed easily.”

While the effect may seem quite miniscule, it is a significant proof of concept, and the researchers believe it represents a first step toward organic molecular thermoelectricity. Next up, the researchers plan to test different organic molecules and metals, as well as fine tuning the assembly of the structure. Majumdar said the field of organic thermoelectricity could open doors to a new, inexpensive source of energy. “The use of inexpensive organic molecules and metal nanoparticles offers the promise of low-cost, plastic-like power generators and refrigerators,” he said.