You are here: Home › News › Atom-Smashers Get Peek At Top Quark
By Will Parker on December 14, 2006 in News

International physicists have detected for the first time a subatomic particle – the top quark – without the simultaneous production of its antimatter partner. This rare event, set to be reported in Physical Review Letters, could help scientists better explain how the universe works and how objects acquire their mass. The top quark is the heaviest known elementary particle, with the same mass as a gold atom. It does not occur naturally and in this instance was created in the Department of Energy’s Fermi National Accelerator Laboratory. 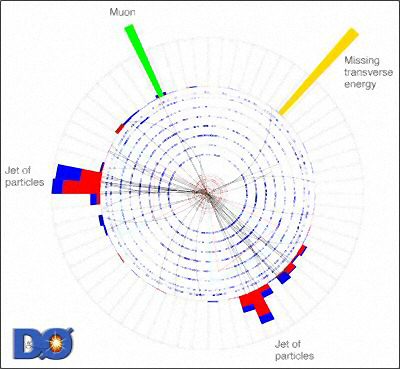 “We’ve been looking for single top quarks for 12 years, and until now no one had seen them,” said the University of California – Riverside’s Ann Heinson, the leader of the research team. “The detection of single top quarks – we detected 62 in total – will allow us to study the properties of top quarks in ways not accessible before. We are now able to study how the top quark is produced and how it decays.” The detection of the lone top quark was the result of analyzing data from collision experiments conducted between 2002 and 2005 at the Department of Energy’s Tevatron Collider, the world’s highest energy particle accelerator. The collisions recorded were those between protons and antiprotons (the antimatter counterparts of protons).

When a proton smashes head-on into an antiproton at velocities close to the speed of light, the collision occasionally produces a top quark. But this unstable particle exists for only a fraction of a second before it decays into lighter particles, thereby complicating its detection. Physicists therefore must look at the top quark’s descendents to identify it.

“We detected the top quark using the electronic signature of its decay products,” explained Heinson. “We measured the position of charged particles using a silicon vertex detector, which is an instrument – first encountered by the particles after the collision – that can precisely reconstruct the trajectories of charged particles. Since theory predicts single top quark production, we knew what to look for. It was extremely difficult, however, to find.”

GE Corn A Threat To Waterways?