You are here: Home › Climate Change › News › Sunscreen killing coral reefs
By Will Parker on October 20, 2015 in Climate Change, News 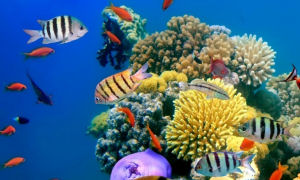 Oxybenzone, a UV-filtering compound used in sunscreens, has been found in high concentrations in the waters around popular coral reefs in Hawaii and the Caribbean. According to new research, the chemical not only kills coral, it causes DNA damage in adults and deforms the DNA in coral in the larval stage, making it unlikely they can develop properly.

The study, appearing in the journal Archives of Environmental Contamination and Toxicology, was penned by an international team of scientists that included University of Central Florida professor and diving enthusiast John Fauth.

“Coral reefs are the world’s most productive marine ecosystems and support commercial and recreational fisheries and tourism,” Fauth said. “In addition, reefs protect coastlines from storm surge. Worldwide, the total value of coral reefs is tremendous. And they are in danger.”

Researcher Craig Downs, from the Haereticus Environmental Laboratory in Virginia, added that the use of oxybenzone-containing products needs to be seriously deliberated in islands and areas where coral reef conservation is a critical issue. “We have lost at least 80 percent of the coral reefs in the Caribbean. Any small effort to reduce oxybenzone pollution could mean that a coral reef survives a long, hot summer, or that a degraded area recovers. Everyone wants to build coral nurseries for reef restoration, but this will achieve little if the factors that originally killed off the reef remain or intensify in the environment,” he warned.

In laboratory experiments, the team exposed coral larvae and cells of adult corals to increasing concentrations of oxybenzone. They discovered that oxybenzone deforms coral larvae by trapping them in their own skeleton, making then unable to float with currents and disperse.

Oxybenzone also caused coral bleaching, which is a prime cause of coral mortality worldwide. Corals bleach when they lose or expel the algae that normally live inside them, thus losing a valuable source of nutrition. In addition, coral larvae exposed to increasing oxybenzone concentrations suffered more DNA damage.

Cells from seven species of corals were killed by oxybenzone at concentrations similar to those detected in ocean water samples. Three of the species that the researchers tested are currently listed as threatened under the US Endangered Species Act.

The team concluded that; “oxybenzone poses a hazard to coral reef conservation, and threatens the resiliency of coral reefs to climate change.”

So what can everyday divers do to protect the reefs? “Wear rash guards or scuba wetsuits and skip all the hygienic products when you go diving,” Fauth recommended. “If we could do it for a week at a time, people can certainly forgo it for a few hours to help protect these reefs for our children and their children to see.”

Related:
Discuss this article in our forum
Sunscreen, cosmetics cause DNA damage
Species turnover: this isn’t the biodiversity you’re looking for
Ancient Proto-Eyes Turned-On By Moonlight