You are here: Home › News › Earthquakes Still Threaten The Central United States
By Will Parker on October 2, 2000 in News 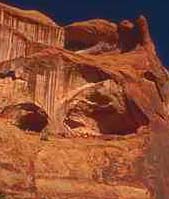 The threat of large earthquakes striking the New Madrid seismic zone remains all too real for people in St. Louis, Memphis and other parts of the central United States – despite recent reports to the contrary.

That is the conclusion of a new study by geophysicists Shelley J. Kenner and Paul Segall published in the journal Science.

According to the authors, devastating earthquakes could rip through the New Madrid seismic zone along the Mississippi River sometime this century – potentially causing widespread destruction from Arkansas to Iowa.

“We can’t say for certain there aren’t going to be any earthquakes in the next few decades,” says Kenner, a postdoc in geophysics at Caltech and lead author of the Sept. 29 Science study.

“There was a sequence of large earthquakes in the past, and it could happen again,” adds Segall, a professor of geophysics at Stanford.

According to the U.S. Geological Survey (USGS), the central Mississippi Valley is the most earthquake-prone region of the United States east of the Rocky Mountains. Most quakes in the area are relatively small and occur within the 100-mile-long New Madrid seismic zone that extends along the Mississippi from Missouri to Arkansas.

During the winter of 1811 to 1812, the sparsely populated New Madrid, Mo., area was jolted by a series of three powerful earthquakes now estimated to have been of magnitude 7.5 to 8.3. The quakes caused church bells to ring a thousand miles away in Boston and even changed the course of the Mississippi River.

Paleoseismic evidence collected in recent decades indicates that strong “earthquake triplets” similar in magnitude to the 1811-12 temblors have occurred approximately every 500 years along the New Madrid fault and are likely to happen again.

Some geologists say there is a 90 percent chance that earthquakes of magnitude 6 to 7 will strike the region in the next 50 years, causing extensive damage and injury – especially in now heavily populated urban areas such as St. Louis and Memphis, which are built along the Mississippi on unstable mud banks.

But in April 1999, Science magazine published a controversial study, which concluded that “the hazard posed by great earthquakes in the New Madrid seismic zone appears to be overestimated.”

The authors of the 1999 study, led by geologist Seth Stein of Northwestern University, wrote that a large earthquake would not strike the region for at least 1,000 years.

“It is also possible that 1811-12-style earthquakes may never recur,” according to the Stein research team.

The authors used Global Positioning System (GPS) satellite measurements to track ground movement in the New Madrid region between 1991 and 1997, but observed “little, if any motion” within the fault zone.

According to Stein and his co-authors, this lack of movement suggests that it would take at least 1,000 years to accumulate enough stress along the fault to generate a magnitude 7 earthquake – and at least 2,500 years for a magnitude 8 temblor to occur.

But Kenner and Segall disagree with the conclusions reached by Stein and his colleagues.

“We’re not disputing their GPS data,” says Segall. “We’re saying that, if you use good data in an inappropriate model, your conclusions will be inappropriate.”

Segall points out that the 1999 Stein study used earthquake-prediction models for California’s San Andreas fault and applied them to the New Madrid seismic zone – a completely different type of fault system.

The San Andreas is a “transform fault” that marks the boundary between two tectonic plates – the North American and the Pacific. These two massive land formations constantly grind past one another. As the Pacific plate moves northward, stress and strain accumulate along the fault, triggering large and small earthquakes. The relatively rapid movement of the Pacific plate is easily observed by GPS and ground-based detectors.

But the New Madrid is an “intraplate fault” located in the middle of the North American plate, not at the boundary. And while large segments of the San Andreas are clearly visible, the New Madrid fault lies hidden under deep layers of sediment.

“Intraplate zones are something of a mystery,” notes Segall. “We can’t even map the fault, so we don’t really know how big it is.”

“As scientists, we don’t understand what’s happening in the intraplate setting all that well,” adds Kenner. “What we tried to do in our current Science study is to come up with a model that’s a better approximation of the New Madrid seismic zone.”

The Kenner-Segall model suggests that there is a preexisting weak zone beneath the New Madrid fault where stress accumulates over time.

“You may not be able to see very much stress accumulation,” observes Segall, “but it’s there.”

After many years, the stress shifts from the weak zone toward the surface, where it builds up and eventually causes the fault to rupture, triggering a large earthquake as the ground slips some 15 to 30 feet.

How often do these major quakes occur? Every 250 to 4,000 years, say Kenner and Segall, which means that another sequence of large temblors could strike by the middle of the century – perhaps sooner.

“The New Madrid fault is like a crack in the wall,” comments Segall. “You try to cover it with plaster, but the crack reappears over and over again. It’s always going to be there, because it’s a preexisting weakness.

“I can’t emphasize enough that there is a huge uncertainty when it comes to intraplate events,” he adds. “For example, we don’t know why the earthquakes come in triplets, but it has happened on a regular basis in the past.”

“If you live in the New Madrid area, you may still have an earthquake problem,” says Segall. “The most prudent thing for people to do is to prepare.”