You are here: Home › News › Human Guinea Pig Success For Omega 3 Cancer Treatment
By Will Parker on November 10, 2005 in News 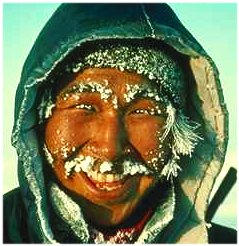 The current issue of the journal Nutrition and Cancercontains an interesting case study of a lung cancer patient whose cancer has almost disappeared after dietary intervention with omega-3 fatty acids. The study was not based on a clinical trial; rather, the treatment came about by chance. The patient, identified as D.H., was in fact a neighbor of researcher Ron Pardini, a professor of biochemistry at the University of Nevada.

Pardini’s research had shown that omega-3 fatty acids significantly depressed the growth of human mammary, ovarian, colon, prostate and pancreatic cancer cells in athymic mice (mice that model human cancers). Studies in U.S. have been limited to animal models so far, but D.H.’s results may accelerate human clinical trials. Pardini’s research was inspired by observations that Inuit populations – who have a high intake of omega-3 fatty acids thanks to their fish oil consumption – have significantly less cases of breast and prostate cancer.

D.H. was diagnosed with terminal lung cancer in 2000 and told that he had only months to live, explained Pardini. “But five years later, he is still alive, and has even gained a little weight.” The article states that computer tomography scans show the cancerous tumors found in D.H.’s lungs have shrunk to 10 percent of what they were in 2000.

D.H.’s treatment was a nutritional intervention, based upon dramatically increasing the patient’s intake of omega-3 fatty acids via supplements containing high levels of fish oil and golden algae oil. Pardini said that the high doses of fish oil and golden algae oil taken daily were complemented with a reduction in corn-based foods. Corn contains omega-6 fatty acids that Pardini said are found to increase cancer growth.

“We have good evidence for employing nutritional interventions to improve cancer treatment and patient well-being,” said Pardini, who is optimistic that future clinical trials may repeat D.H.’s success.