You are here: Home › News › Space › Mars astronauts will suffer significant brain damage
By Will Parker on May 1, 2015 in News, Space 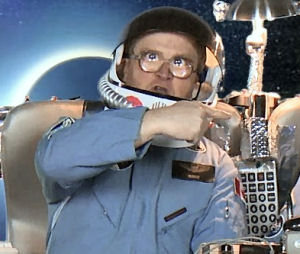 Scientists at the University of California, Irvine have been investigating what might happen to an astronaut’s brain during the long journey to Mars and found that constant exposure to highly energetic charged particles – much like those found in the galactic cosmic rays that bombard astronauts during extended spaceflights – cause significant damage to the central nervous system and brain.

“This is not positive news for astronauts deployed on a two- to three-year round trip to Mars,” said Charles Limoli, a professor of radiation oncology in UCI’s School of Medicine. “Performance decrements, memory deficits, and loss of awareness and focus during spaceflight may affect mission-critical activities, and exposure to these particles may have long-term adverse consequences to cognition throughout life.”

For the study, rodents were subjected to charged particle irradiation (fully ionized oxygen and titanium) at the NASA Space Radiation Laboratory at the Brookhaven National Laboratory. The researchers found that exposure to these particles resulted in brain inflammation, which disrupted the transmission of signals among neurons.

Imaging revealed how the brain’s communication network was impaired through reductions in the structure of nerve cells called dendrites and spines. Additional synaptic alterations in combination with the structural changes interfered with the capability of nerve cells to efficiently transmit electrochemical signals. Furthermore, these differences were parallel to decreased performance on behavioral tasks designed to test learning and memory.

While cognitive deficits in astronauts would take months to manifest, the time required for a mission to Mars is more than sufficient for such deficits to develop. People working for extended periods on the International Space Station do not face the same level of bombardment with galactic cosmic rays, as they are still within the protective magnetosphere of the Earth.

Away from the Earth’s protection, preventative treatments may offer some hope. “We are working on pharmacologic strategies involving compounds that scavenge free radicals and protect neurotransmission,” Limoli said. “But these remain to be optimized and are under development.”