You are here: Home › Medicine › News › Ultrasound used to enhance senses
By Will Parker on January 13, 2014 in Medicine, News 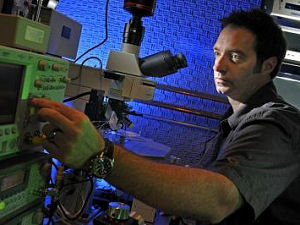 Reporting on the work in Nature Neuroscience, Tyler explained how he delivered focused ultrasound to an area of the cerebral cortex that processes sensory information received from the hand. He then stimulated the median nerve (a major nerve that runs down the arm) and recorded the subjects’ brain responses using electroencephalography (EEG). The team of researchers found that the use of ultrasound decreased the intensity of the brainwave signals recorded via EEG.

The scientists then administered two classic neurological tests: the two-point discrimination test, which measures a subject’s ability to distinguish whether two nearby objects touching the skin are truly two distinct points, rather than one; and the frequency discrimination task, a test that measures sensitivity to the frequency of a series of air puffs.

What Tyler found was unexpected. The subjects receiving ultrasound showed significantimprovements in their ability to distinguish pins at closer distances and to discriminate small frequency differences between successive air puffs.

“Our observations surprised us,” said Tyler. “Even though the brain waves associated with the tactile stimulation had weakened, people actually got better at detecting differences in sensations.”

How exactly could the suppression of brain responses to sensory stimulation heighten perception? Tyler speculates that the ultrasound altered an important neurological balance. “It seems paradoxical, but we suspect that the particular ultrasound waveform we used in the study alters the balance of synaptic inhibition and excitation between neighboring neurons within the cerebral cortex,” he said. “We believe focused ultrasound changed the balance of ongoing excitation and inhibition processing sensory stimuli in the brain region targeted and that this shift prevented the spatial spread of excitation in response to stimuli resulting in a functional improvement in perception.”

To understand how well they could pinpoint the effect, the research team moved the ultrasound beam one centimeter in either direction of the original site of brain stimulation – and the effect disappeared.

“That means we can use ultrasound to target an area of the brain as small as the size of an M&M,” Tyler said. “This finding represents a new way of noninvasively modulating human brain activity with a better spatial resolution than anything currently available.”

Tyler speculates that the new work could open the door to safe and effective noninvasive ways to modulate the flow of information in cellular circuits within the living human brain. “In neuroscience, it’s easy to disrupt things,” he said. “We can distract you, make you feel numb, trick you with optical illusions. It’s easy to make things worse, but it’s hard to make them better. These findings make us believe we’re on the right path.”