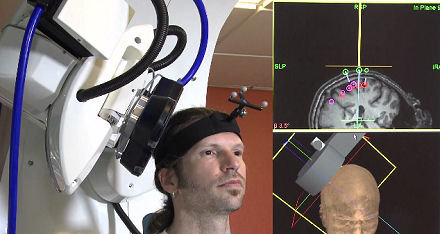 Their experiment, detailed in the journal PLOS ONE, involved reading the brain activity of the first subject, transmitting that information over the Internet, and then “inserting” the information into the brain of the second subject.

Previous studies on electroencephalogram (EEG) based brain communication have typically used an interface between the human brain and computer. In these studies, electrodes attached to a person’s scalp record electrical currents in the brain which are then fed into the computer.

In the new work, the research team added a receiving human brain on the other end of the system. Four participants, aged 28 to 50, took part in the study. One of the four subjects was assigned to the brain-computer interface branch and was the sender; the other three were assigned to receive the messages using a similar interface.

Using EEG (for input) and transcranial magnetic stimulation (TMS, for output), the researchers first encoded the greetings “hola” (hello) and “ciao” (goodbye) from the brain of the sender into binary code and then transmitted the signals via the Internet from India to France. There, a computer-brain interface transmitted the message to the receiver’s brain via non-invasive TMS.

The subjects experienced this insertion of information as phosphenes -flashes of light in their peripheral vision. The light appeared in numerical sequences that enabled the receiver to decode the information in the message, and while the subjects did not report feeling anything, they did correctly receive the greetings. The researchers report a total error rate of just 15 percent, 11 percent on the decoding end and five percent on the initial coding side.

“By using advanced precision neuro-technologies… we were able to directly and noninvasively transmit a thought from one person to another, without them having to speak or write,” said researcher Alvaro Pascual-Leone, Director of the Berenson-Allen Center for Noninvasive Brain Stimulation at Beth Israel Deaconess Medical Center. “This in itself is a remarkable step in human communication, but being able to do so across a distance of thousands of miles is a critically important proof-of-principle for the development of brain-to-brain communications. We believe these experiments represent an important first step in exploring the feasibility of complementing or bypassing traditional language-based or motor-based communication.”

Quantum camera takes pic using only entangled photons
Strangely, the loss of forests may actually be cooling the planet

Funko Einstein - Back to the Future