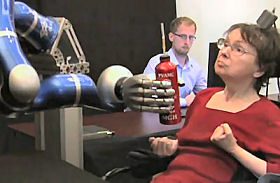 A paralyzed woman has been able to reach for and sip from a drink on her own by using her thoughts to direct a robotic arm. Previously, thought control with neural implants had beendemonstrated using monkeys, but this new trial involved the most complex brain-computer functions achieved to date with humans.

A report on the BrainGate system, published inNature, describes how two paralyzed stroke victims learned to use the system to make reach-and-grasp movements with a robotic arm. BrainGate is the result of collaboration between researchers from the Department of Veterans Affairs, Brown University, Massachusetts General Hospital, Harvard Medical School and the German Aerospace Center.

For the paralyzed woman, it was the first time since her stroke that she was able to sip a drink without help from a caregiver. “The smile on her face was a remarkable thing to see. For all of us involved, we were encouraged that the research is making the kind of progress that we had all hoped,” said lead investigator, Leigh Hochberg, of Brown University. He adds that while the system is still years away from practical use, the work is gradually revealing the brain signals that carry multi-dimensional information about human movement.

The BrainGate system consists of a sensor to monitor brain signals and computer software and hardware that turns these signals into digital commands for external devices. The sensor is a tiny square of silicon containing 100 hair-thin electrodes which can record the activity of groups of brain cells. It is implanted into the motor cortex, a part of the brain that directs movement.

Hochberg said that both the male and female participants in the trial learned to perform complex tasks with the robotic arm by imagining the movements of their own arms and hands.

In one task, several foam targets were mounted on levers on a tabletop and programmed to pop up one at a time, at different positions and heights. The participants had less than 30 seconds to grasp each target using the robotic arm. One participant was able to grasp the targets 62 percent of the time, and the other had a 46 percent success rate.

“This is another big jump forward to control the movements of a robotic arm in three-dimensional space. We’re getting closer to restoring some level of everyday function to people with limb paralysis,” said co-researcher John Donoghue, the director of the Institute for Brain Science at Brown University.

Donoghue said the woman’s ability to use the BrainGate was especially encouraging because her stroke occurred nearly 15 years ago and her sensor was implanted more than five years ago. Some researchers have wondered whether neurons in the motor cortex might die or stop generating meaningful signals after years of disuse. Researchers in the field have also worried that years after implantation, the sensor might break down and become less effective at enabling complex motor functions.

The researchers envision a system that would be stable for decades, wireless and fully automated. For now, the sensor – and therefore the user – must be connected via cables to the rest of the system. Improvements are also needed to enhance the precision and speed of control. In the foam target task, for example, a successful reach-and-grasp motion typically took almost 10 seconds.

The ultimate goal, say the researchers, is to reconnect the brain to paralyzed limbs, rather than robotic ones. In that scenario, the BrainGate system would be used to control a functional electrical stimulation (FES) device, which delivers electrical stimulation to paralyzed muscles. The BrainGate, in effect, would work like a replacement link between the brain and the muscle. Such technology has already shown promise in experiments with humans, where a participant was able to use the system to direct the movements of a virtual, computer-animated arm designed to simulate FES control of a real arm.