You are here: Home › News › Direct Brain Control Of Robot Demonstrated
By Will Parker on December 8, 2007 in News 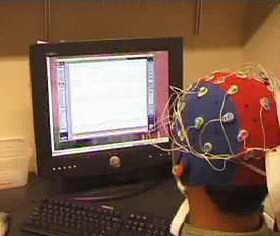 A metal skullcap with electrodes sticking out has turned a sci-fi cliché into reality, with the wearer being able to control a robot’s movements with thought power alone. University of Washington researcher, Rajesh Rao, has demonstrated that an individual can “order” the robot to move to specific locations and pick up specific objects merely by generating the proper brain wave instructions.

“This is really a proof-of-concept demonstration,” Rao said, when he presented his results at the Current Trends in Brain-Computer Interfacing meeting. “It suggests that one day we might be able to use semi-autonomous robots for such jobs as helping disabled people or performing routine tasks in a person’s home.”

The controlling individual (a graduate student in the demonstration) wears a cap dotted with 32 electrodes which pick up brain signals from the scalp based on a technique called electroencephalography. The person watches the robot’s movements on a computer screen via two cameras, one mounted on the robot and another above it, and “thinks” which way the robot should move. 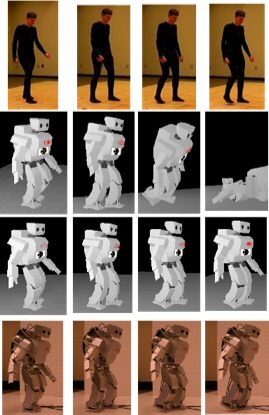 Currently, the “thought commands” are limited to a few basic instructions; choosing one of two available objects, picking it up, and carrying it to one of two locations. Impressively, preliminary results show 94 percent accuracy in choosing the correct object.

“One of the important things about this demonstration is that we’re using a ‘noisy’ brain signal to control the robot,” Rao explained. “The technique for picking up brain signals is non-invasive, but that means we can only obtain brain signals indirectly from sensors on the surface of the head, and not where they are generated deep in the brain. As a result, the user can only generate high-level commands such as indicating which object to pick up or which location to go to, and the robot needs to be autonomous enough to be able to execute such commands.”

The research team has plans to extend the research to use more complex objects and equip the robot with skills such as avoiding obstacles in a room. Rao also wants to make the robot’s behavior more adaptive to the environment, which means the robot’s programming must enable some kind of learning to occur.