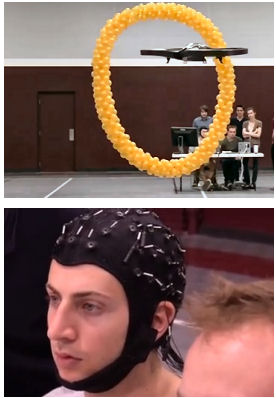 In what they say is the first step toward restoring the autonomy of paralysis sufferers, University of Minnesota researchers have demonstrated complex maneuvering by a drone controlled only by the user’s thoughts. The work is documented in the latest issue of the Journal of Neural Engineering.

“Our study shows that for the first time, humans are able to control the flight of flying robots using just their thoughts, sensed from non-invasive brain waves,” said lead author of the study Professor Bin He.

The non-invasive technique used was electroencephalography (EEG), which recorded the electrical activity of the subjects’ brain through a cap fitted with 64 electrodes.

The subjects were positioned in front of a monitor that relayed images of the drone’s flight through its on-board camera. Brain signals were recorded by the cap and sent to the drone over WiFi.

A number of statistical tests were used to calculate how each subject performed. A group of subjects also directed the drone with a keyboard in a control experiment, allowing for a comparison between a standardized method and brain control. All five brain control subjects (three female, two male) were able to successfully control the drone quickly and accurately for a sustained amount of time.

“Our next goal is to control robotic arms using non-invasive brain wave signals, with the eventual goal of developing brain – computer interfaces that aid patients with disabilities or neurodegenerative disorders,” concluded Professor He.