You are here: Home › Evolution › News › New technique for thought-controlled data input almost as accurate as one-fingered typing
By Will Parker on July 31, 2015 in Evolution, News 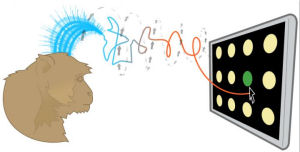 When we type or perform other precise tasks, our brains and muscles usually work together effortlessly. But when a neurological disease or spinal cord injury severs the connection between the brain and limbs, once-easy motions become difficult or impossible.

In recent years researchers have sought to give people suffering from injury or disease some restored motor function by developing thought-controlled prostheses. Such devices tap into the relevant regions of the brain, bypass damaged connections and deliver thought commands to devices such as virtual keypads.

But brains are complex. Actions and thoughts are orchestrated by millions of neurons – biological switches that fire faster or slower in dynamic patterns.

Brain-controlled prostheses currently work with access to a sample of only a few hundred neurons, but need to estimate motor commands that involve millions of neurons. So tiny errors in the sample – neurons that fire too fast or too slow – reduce the precision and speed of thought-controlled keypads.

Now, an interdisciplinary team led by Stanford’s Krishna Shenoy has developed a technique to make brain-controlled prostheses more precise. Writing in Nature Communications, Shenoy explains how the prostheses analyze the neuron sample and make dozens of corrective adjustments to the estimate of the brain’s electrical pattern – all in the blink of an eye.

Shenoy’s team tested a brain-controlled cursor meant to operate a virtual keyboard. The thought-controlled keypad would allow a person with paralysis or ALS to run an electronic wheelchair and use a computer or tablet.

“Brain-controlled prostheses will lead to a substantial improvement in quality of life,” Shenoy said. “The speed and accuracy demonstrated in this prosthesis results from years of basic neuroscience research and from combining these scientific discoveries with the principled design of mathematical control algorithms.”

The new corrective technique is based on a recently discovered understanding of how monkeys naturally perform arm movements. The researchers studied animals that were normal in every way. The monkeys used their arms, hands and fingers to reach for targets presented on a video screen. What the researchers sought to learn through hundreds of experiments was what the electrical patterns from the 100- to 200-neuron sample looked like during a normal reach. In short, they came to understand the “brain dynamics” underlying reaching arm movements.

“These brain dynamics are analogous to rules that characterize the interactions of the millions of neurons that control motions,” said co-researcher Jonathan Kao. “They enable us to use a tiny sample more precisely.”

In their current experiments Shenoy’s team members distilled their understanding of brain dynamics into an algorithm that could analyze the measured electrical signals that their prosthetic device obtained from the sampled neurons. The algorithm tweaked these measured signals so that the sample’s dynamics were more like the baseline brain dynamics. The goal was to make the thought-controlled prosthetic more precise.

To test this algorithm the Stanford researchers trained two monkeys to choose targets on a simplified keypad. The keypad consisted of several rows and columns of blank circles. When a light flashed on a given circle the monkeys were trained to reach for that circle with their arms.

The real experiment only scored virtual taps that came from the monkeys’ brain-controlled cursor. Although the monkey may still have moved his fingers, the researchers only counted a hit when the brain-controlled cursor, corrected by the algorithm, sent the virtual cursor to the target. The prosthetic scored 26 thought-taps in 30 seconds, about 90 percent as quickly as a monkey’s finger.

The FDA has now given Shenoy’s team the green light to conduct a pilot clinical trial of their thought-controlled cursor on people with spinal cord injuries. “This is a fundamentally new approach that can be further refined and optimized to give brain-controlled prostheses greater performance, and therefore greater clinical viability,” Shenoy said.