You are here: Home › Medicine › News › Stimulant drug abuse appears to reduce brain volume in women but not men
By Will Parker on July 14, 2015 in Medicine, News 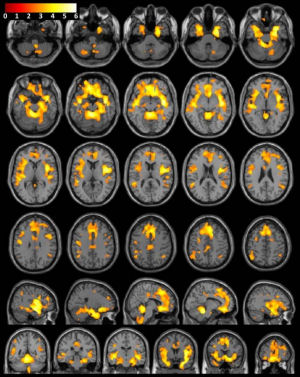 “We found that after an average of 13.5 months of abstinence, women who were previously dependent on stimulants had significantly less gray matter volume in several brain areas compared to healthy women,” said the study’s senior author, Jody Tanabe, at the University of Colorado Denver. “These brain areas are important for decision making, emotion, reward processing and habit formation.”

For the study, Tanabe and her colleagues sought to determine how the brains of people previously dependent on stimulants differed from the brains of healthy people.

The team analyzed structural brain MRI scans in 127 men and women, including 59 people (28 women and 31 men) who were previously dependent on cocaine, amphetamines, and/or methamphetamine for an average of 16 years, and 68 healthy people (28 women and 40 men) who were similar in age and gender. The MRI results showed that after an average of 14 months of abstinence, women who were previously dependent on stimulants had significantly less gray matter volume in frontal, limbic and temporal regions of the brain.

The researchers also looked at how these brain volume differences were related to behaviors. They found that lower regional gray matter volumes correlated with behavioral tendencies to seek reward and novelty.

“Lower gray matter volumes in women who had been stimulant dependent were associated with more impulsivity, greater behavioral approach to reward, and also more severe drug use,” Tanabe said. “In contrast, all men and healthy women did not show such correlations.”

Tanabe believes the results may provide a clue to the biological processes underlying the clinical course of stimulant abuse in men and women. “We hope that our findings will lead to further investigation into gender differences in substance dependence and, thus, more effective treatments,” she concluded.

Related:
Discuss this article in our forum
UV light can be addictive, say scientists
Romantic rejection triggers reward and addiction centers in the brain
Painkiller addiction in U.S. an “epidemic,” say senior medicos
Nicotine receptor gets blame for Internet addiction