You are here: Home › Mind and Brain › News › Brain mapping gets a reality check
By Will Parker on July 10, 2013 in Mind and Brain, News 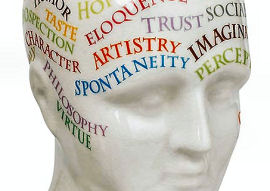 The idea that researchers can unravel different brain functions by performing MRI scans while subjects perform tasks is deeply flawed, say Case Western Reserve University scientists in a scathing critique of recent high profile studies that rely on neuroimaging. The new work calls into question the findings from recent diverse experiments that have linked different areas of the brain to a variety of stimuli, including love,music appreciation, and pleasure.

These sorts of brain mapping experiments attempt to identify the cognitive functions associated with discrete cortical regions. They generally rely on a method known as “cognitive subtraction.” However, say the authors of the new critique, a basic assumption underlying this approach – that brain activation is due to the additional processes triggered by the experimental task – is wrong.

By subtracting activity recorded during the control task from the experimental task, researchers try to isolate distinct cognitive processes and map them onto specific brain areas.

Case Western’s Anthony Jack and co-researcher Benjamin Kubit challenge a key assumption of the subtraction method and several tenets of Ventral Attention Network theory, one of the longest established theories in cognitive neuroscience and which relies on cognitive subtraction. In their paper in Frontiers in Human Neuroscience, they highlight a new and additional problem that casts doubt on many neuroimaging studies.

“It’s clear these increases in activity are not due to additional task-related processes,” Jack argues. “Instead of cognitive subtraction, what we are seeing here is cognitive addition – parts of the brain do more the less the task demands.”

Kubit and Jack caution that researchers must consider whether an increase in activity in a suppressed region is due to task-related processing, or the release of suppression, if they want to accurately interpret their data. In their paper, they lay out data from other studies, meta-analysis and resting connectivity that all suggest activation of a particular brain area, the right temporoparietal junction (rTPJ), in attention reorienting tasks can be most simply explained by the release of suppression.

Jack is cautious about extrapolating those findings too far. “We haven’t shown that Ventral Attention Network theory is false,” he said, “but we have raised a big question mark over the theory and the evidence that has been taken to support it.”

The working hypothesis for more than a decade has been that the basic function of the rTPJ is attention reorienting. But, upon considering the possibility of cognitive addition as well as cognitive subtraction, the evidence supporting this view looks slim, the researchers assert. “The evidence is compelling that there are two distinct areas near rTPJ – regions which are not only involved in distinct functions but which also tend to suppress each other,” Jack said. “There is no easy way to square this with the Ventral Attention Network account of rTPJ.”

A number of broad challenges to brain imaging have been raised in the past by psychologists and philosophers, one of the most popular objections has been to liken brain mapping to phrenology. However, Kubit and Jack go beyond the existing critiques that apply to naïve brain mapping.

The Case Western team believe one reason researchers have felt safe with the assumptions underlying cognitive subtraction is that they have assumed the brain will not expend any more energy than is needed to perform the task at hand.

“Yet the brain clearly does expend more energy than is needed to guide ongoing behavior,” Jack said. “The influential neurologist Marcus Raichle has shown that task-related activity represents the tip of the iceberg, in terms of neural and metabolic activity. The brain is constantly active and restless, even when the person is entirely ‘at rest’ – that is, even when they aren’t given any task to do.”

In concluding the critique, Jack said his paper won’t hurt brain imaging as a discipline. “Quite the reverse, understanding the full implications of the suppressive relationship between brain networks will move the discipline forward.” Brain mapping, he believes, was just the first phase of this science. “What we are talking about here is refining the science,” he said. “It should be no surprise that that journey involves some course corrections. The key point is that we are moving from brain mapping to identifying neural constraints on cognition that behavioral psychologists have missed.”

Related:
Discuss this article in our forum
Brain scans hint at root of consciousness
Neuroscientists Map Violent Media’s Effects On Brain
Eating disorders lurking in most women
This Is Your Brain On Jazz

Brain-training claims questioned
A blue planet where it rains glass