You are here: Home › Environment › News › Researchers find link between cannabis use and fewer parasites
By Will Parker on June 2, 2015 in Environment, News 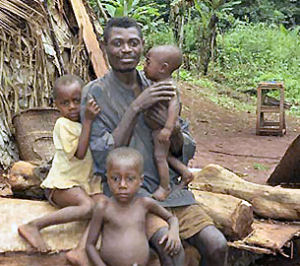 The more that hunter-gatherers in the Congo smoke cannabis, the less they are infected by parasitic intestinal worms, according to Washington State University (WSU) researchers who say that the tribe may unconsciously be, in effect, smoking medical marijuana.

Ed Hagen, a WSU Vancouver anthropologist, explored cannabis use among the Aka foragers to see if people away from the cultural and media influences of Western civilization might use plant toxins medicinally. “In the same way we have a taste for salt, we might have a taste for psychoactive plant toxins, because these things kill parasites,” he said. Hagen’s study appears in the American Journal of Human Biology.

The Aka are a “pygmy” people of the Congo basin. As one of the world’s last groups of hunter-gatherers, they offer anthropologists a window into a way of life accounting for some 99 percent of human history. They might also offer an alternative hypothesis to explain human drug use.

The prevailing explanation is that recreational drugs “hijack the pleasure centers of the brain,” making people feel good. But they also trigger mechanisms that tell us we’re consuming something toxic, tasting bitter and making us feel sick.

“So we thought, ‘Why would so many people around the world be using plant toxins in this very ‘recreational’ way? If you look at non-human animals, they do the same thing, and what a lot of biologists think is they’re doing it to kill parasites,” said Hagen.

Hagen surveyed almost all of the nearly 400 adult Aka along the Lobaye River in the Central African Republic and found roughly 70 percent of the men and 6 percent of the women used cannabis. The polling was supported by bioassays of the men that found high enough levels of THCA, a metabolic byproduct of cannabis’s active ingredient, to indicate that 68 percent of them had recently smoked.

Stool samples collected from the men to gauge their worm burden found some 95 percent of them were infected with helminths. But those who consumed cannabis had a significantly lower rate of infection. Additionally, a year after being treated with a commercial antihelmintic, the cannabis users were reinfected with fewer worms.

The researchers are unsure when the Aka might have first smoked cannabis or when it arrived on the continent. It may have come with traders from the Indian subcontinent around the first century A.D., but Hagen and his colleagues say it might not have been smoked until European colonization in the 17th Century.

Related:
Discuss this article in our forum
Marijuana’s long-term effects on the brain: do you want the good news or the bad news?
Scientists scope effects of marijuana ingredients via MRI
Marijuana farms impacting fragile ecosystems
Honey, I baked the kids