You are here: Home › Evolution › News › How generosity leads to evolutionary success
By Will Parker on September 2, 2013 in Evolution, News 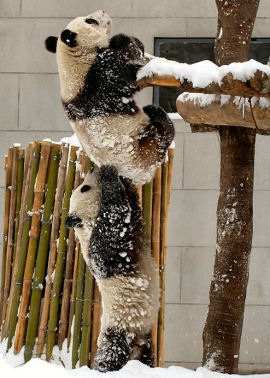 New insights into the classical game theory match-up known as the “Prisoner’s Dilemma” might help explain the presence of generosity in nature, an inclination that can sometimes seem counter to the Darwinian notion of survival of the fittest.

Biologists have long been puzzled about why there is so much apparent cooperation, generosity, and altruism, in nature. Previous research using game theory has helped to explainwhy generosity arises and the new work takes that further to explain why generosity is a winning evolutionary strategy.

Conducted by University of Pennsylvania biologists Alexander J. Stewart and Joshua B. Plotkin, the new analysis builds on previous research by computational biologist William Press and physicist-mathematician Freeman Dyson, who in 2012 identified a new class of strategies for succeeding in the Prisoner’s Dilemma.

The Prisoner’s Dilemma is a way of studying how individuals choose whether or not to cooperate. In the game, if both players cooperate, they both receive a payoff. If one cooperates and the other does not, the cooperating player receives the smallest possible payoff, and the defecting player the largest. If both players do not cooperate, they receive a payoff, but it is less than what they would gain if both had cooperated. In other words, it pays to cooperate, but it can pay even more to be selfish.

In 2012, Press and Dyson identified a group of strategies for playing a version of the game known as the “Iterated Prisoner’s Dilemma,” where two players repeatedly face off against one another and can employ different strategies to beat their opponent.

Press and Dyson called this class of approaches “zero determinant” strategies because the score of one player is related linearly to the other. Focusing on a subset of zero determinant approaches they deemed to be extortion strategies, they observed that if a player employed an extortion strategy against an unwitting opponent, that player could force the opponent into receiving a lower score or payoff.

Stewart and Plotkin became intrigued with this finding and began to explore a different approach to the Prisoner’s Dilemma. Instead of a head-to-head competition, they envisioned a population of players matching up against one another, as might occur in a human or animal society in nature. The most successful players would get to “reproduce” more, passing on their strategies to the next generation of players.

“The fact that there are extortion strategies immediately suggests that, at the other end of the scale, there might also be generous strategies,” Stewart explained. “You might think being generous would be a stupid thing to do, and it is if there are only two players in the game, but, if there are many players and they all play generously, they all benefit from each other’s generosity.”

Stewart noticed the first of these generous approaches among the zero determinant strategies that Press and Dyson had defined. After simulating how some generous strategies would fare in an evolving population, he and Plotkin crafted a mathematical proof showing that, not only can generous strategies succeed in the evolutionary version of the Prisoner’s Dilemma, in fact these are the only approaches that resist defectors over the long term. “Our paper shows that no selfish strategies will succeed in evolution,” Plotkin said. “The only strategies that are evolutionarily robust are generous ones.”

The researchers maintain that the discovery, while abstract, helps explain the presence of generosity in nature. “When people act generously they feel it is almost instinctual, and indeed a large literature in evolutionary psychology shows that people derive happiness from being generous,” Plotkin said. “It’s not just in humans. Of course social insects behave this way, but even bacteria and viruses share gene products and behave in ways that can’t be described as anything but generous.”

“A population that encourages cooperation does well,” Stewart added. “To maintain cooperation over the long term, it is best to be generous.”