You are here: Home › Environment › News › Legacy of acid rain threatens water supplies
By Will Parker on August 26, 2013 in Environment, News 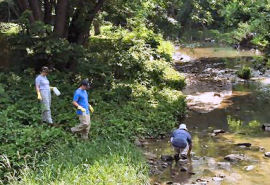 The ongoing effects of river alkalinization – paradoxically caused by acid rain – are showing up across the East Coast of the U.S. and scientists are unsure how long they will persist.

In the first survey of its kind, researchers looked at long-term alkalinity trends in 97 streams and rivers from Florida to New Hampshire. The sites ranged from small headwater streams to some of the nation’s largest rivers. The findings, published in the journal Environmental Science and Technology, indicate that over the past 25 to 60 years, two-thirds of the waterways have become significantly more alkaline.

“Acid rain has led to increased outputs of alkalinity from watersheds and contributed to long-term, increasing trends in our rivers. And this is twenty years after federal regulations were enacted to reduce the airborne pollutants that cause acid rain,” noted the study’s lead author Sujay Kaushal, from the University of Maryland. “What we are seeing may be a legacy effect of more than five decades of pollution. These systems haven’t recovered. How many decades will it persist? We really don’t know the answer.”