You are here: Home › Biology › News › New type of cell division discovered
By Will Parker on December 18, 2012 in Biology, News 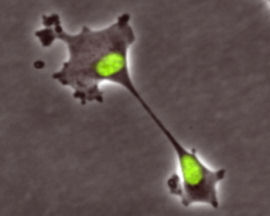 Scientists trying to understand the cellular mechanics of how cancer begins have discovered a new type of cell division which they have named klerokinesis. Researcher Mark Burkard, from the University of Wisconsin, reported his team’s findings yesterday at the American Society for Cell Biology Annual Meeting in San Francisco.

Burkard believes that klerokinesis could be an evolutionary failsafe mechanism, the function of which is to “rescue” a range of cell functions during embryonic development. The discovery has major implications for cancer research, according to Burkard, who “hopes to learn how to promote klerokinesis to help prevent cancer.”

During the century since Boveri’s hypothesis was published, cell biologists have found considerable evidence that aneuploidy can promote the transformation of normal cells into cancer. Until the recent arrival of live single-cell videomicroscopy techniques, it wasn’t possible to examine a key feature of Boveri’s theory: that aneuploidy results from the failure of cytokinesis, the separation of the cell membrane between segregated chromosomes to form two daughter cells.

The researchers said that they were surprised that one-third of the binucleate cells generated healthy daughter colonies. In addition, the majority of their progeny had chromosome sets that perfectly matched the original first-generation RPE cell. “This made Boveri’s random chromosome assortment seem rather improbable,” Burkard explained, “so we carefully observed the cells by time-lapse microscopy to see how this might be occurring.”

He added that the name is derived from the Greek root for allotted inheritance, chosen because each daughter cell inherits a full set of chromosomes. “Klerokinesis is a primitive mechanism of cell division that appears to be preserved in humans, as similar divisions have been observed in organisms such as slime molds,” he noted.