You are here: Home › News › Space › Radioactive elements may make extraterrestrial life more likely on exoplanets
By Will Parker on December 5, 2012 in News, Space 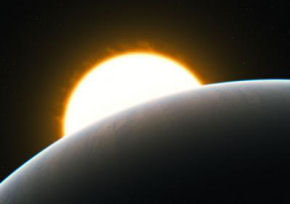 An abundance of radioactive elements observed in a number of distant solar systems would make the constituent planets much warmer, say scientists who contend that this planetary inner-heat could significantly expand the so-called Goldilocks zone around stars where life could evolve. The preliminary findings, by geologists and astronomers at Ohio State University, were presented this week at the American Geophysical Union meeting in San Francisco.

The researchers based their findings on observations of 8 “solar twins” of our Sun – stars that very closely match the Sun in size, age, and overall composition. In order to estimate the amounts of radioactive elements those stars contained, the researchers analyzed data recorded by the High Accuracy Radial Velocity Planet Searcher spectrometer at the European Southern Observatory in Chile.

Specifically, they searched the solar twins for elements such as thorium and uranium, which warm the Earth’s interior and provide the driving force for plate tectonics. These elements heat the planet from the inside, in a way that is completely separate from the heat emanating from Earth’s core. Plate tectonics helps maintain water on the surface of the Earth, so the existence of plate tectonics is sometimes taken as an indicator of a planet’s hospitality to life.

Of the 8 solar twins the researchers have studied so far, seven appear to contain much more thorium than our sun – which suggests that any planets orbiting those stars probably contain more thorium too. That, in turn, means that the interior of the planets are probably warmer than ours.

Researcher Cayman Unterborn said one star in the survey contained 2.5 times more thorium than our Sun. According to his measurements, terrestrial planets that formed around that star probably generate 25 percent more internal heat than Earth does, allowing for plate tectonics to persist longer through a planet’s history, giving more time for live to evolve.

“If it turns out that these planets are warmer than we previously thought, then we can effectively increase the size of the habitable zone around these stars by pushing the habitable zone farther from the host star, and consider more of those planets hospitable to microbial life,” explained Unterborn.

The relationship between plate tectonics and surface water is complex and not completely understood. Earth scientists are beginning to suspect that the same forces of heat convection in the mantle that move Earth’s crust somehow regulate the amount of water in the oceans, too. “It seems that if a planet is to retain an ocean over geologic timescales, it needs some kind of crust ‘recycling system,’ and for us that’s mantle convection,” Unterborn suggested.

On Earth, most of the heat from radioactive decay comes from uranium. Planets rich in thorium, which is more energetic than uranium and has a longer half-life, would “run” hotter and remain hot longer, Unterborn says, which gives them more time to develop life.

He concedes that with only nine samples including our own Sun, it is difficult to estimate internal radioactive heating variation throughout the galaxy. “But from what we know about planet formation, we do know that the planets around those stars [with more radioactive elements] probably exhibit the same variation, which has implications for the possibility of life,” he concluded.