You are here: Home › News › Space › Surprising spiral structure observed around dying star
By Will Parker on October 11, 2012 in News, Space 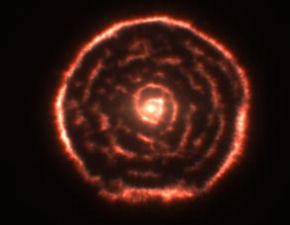 Astronomers using the ALMA telescope in Chile have observed an unusual spiral structure in the gas surrounding the red giant star R Sculptoris.

“We’ve seen shells around this kind of star before, but this is the first time we’ve ever seen a spiral of material coming out from a star, together with a surrounding shell,” said Matthias Maercker, from the University of Bonn and the lead author of a paper detailing the observations.

Maercker said that red giants like R Sculptoris lose large amounts of material and are major contributors to the dust and gas that provide the raw materials for the formation of future generations of stars and planetary systems. While stellar wind is responsible for much of the loss of material that red giants experience, they also periodically undergo mass-ejecting thermal pulses.

These are short-lived phases of explosive helium burning in a shell around the stellar core. A thermal pulse leads to material being blown off the surface of the star at a much higher rate, resulting in the formation of a large shell of dust and gas around the star. After the pulse the rate at which the star loses mass falls again to its normal value.

According to Maercker, thermal pulses occur approximately every 10,000 to 50,000 years, and last only a few hundred years. The new observations of R Sculptoris show that it suffered a thermal pulse event about 1,800 years ago that lasted for about 200 years.

How the material from these pulses was shaped into a spiral was investigated using computer models which emulated the evolution of a binary star system. The spiral structure in the gas, the results suggest, is most likely created by the transit of an as yet unobserved companion star.

“It’s a real challenge to describe theoretically all the observed details coming from ALMA, but our computer models show that we really are on the right track. ALMA is giving us new insight into what’s happening in these stars and what might happen to the Sun a few billion years from now,” says Shazrene Mohamed, of the South African Astronomical Observatory and a co-author of the study.