You are here: Home › News › DNA Shaped Nebula Observed At Center Of Milky Way
By Will Parker on March 16, 2006 in News 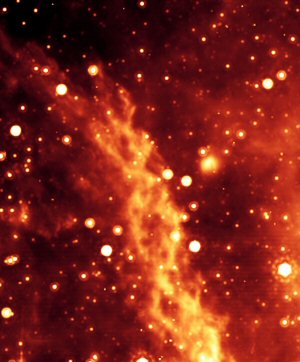 Astronomers using the Spitzer Space Telescope have observed an astonishing double helix shaped nebula near the center of our Milky Way galaxy. The astronomers, writing in Nature, estimate the nebula to be around 80 light years in length and situated only 300 light years away from the massive black hole at the center of the Milky Way.

The DNA shaped nebula stunned the astronomers involved. “We see two intertwining strands wrapped around each other as in a DNA molecule,” said Mark Morris, a UCLA professor of astronomy, and lead author of the report. “Nobody has ever seen anything like that before in the cosmic realm. Most nebulae are either spiral galaxies full of stars or formless amorphous conglomerations of dust and gas. What we see indicates a high degree of order.”

Exactly what creates the torsional wave is still something of a mystery, but Morris doesn’t believe the massive black hole at galactic central is the culprit. Orbiting the black hole, several light years away, is a massive disk of gas called the circumnuclear disk which Morris hypothesizes anchors the magnetic field lines. The disk orbits the black hole approximately once every 10,000 years. “Once every 10,000 years is exactly what we need to explain the twisting of the magnetic field lines that we see in the double helix nebula,” Morris said.