You are here: Home › News › Space › Venus transit to help identify possible neo-Earths
By Will Parker on May 5, 2012 in News, Space 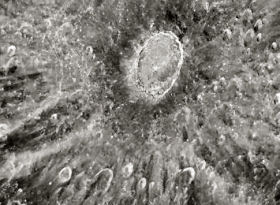 Hoping to eventually identify Earth-like planets in other solar systems, astronomers plan to point the Hubble telescope at the Moon’s Tycho crater (pictured) during the upcoming transit of Venus across the Sun (June 5-6) and analyze the reflected Venusian atmospheric spectra. The Moon-mirror approach is necessary, explain NASA scientists, as Hubble cannot look at the Sun directly.

The Tycho observations are similar to a technique that is already being used in attempts to identify components of the atmospheres of planets outside our solar system passing in front of their stars. The chemical makeup of Venus’s atmosphere is already known, but the Venus transit will be used to test whether this technique could detect the very faint fingerprints of an Earth-like exoplanet when it transits its own star. Venus, say the NASA researchers, is an excellent proxy because it is similar in size and mass to our planet.

The astronomers will use an arsenal of Hubble instruments, the Advanced Camera for Surveys, Wide Field Camera 3, and Space Telescope Imaging Spectrograph, to view the transit in a range of wavelengths, from ultraviolet to near-infrared light. During the transit, Hubble will snap images and perform spectroscopy, dividing the sunlight into its constituent colors, which should yield information about the makeup of Venus’s atmosphere.

NASA said Hubble will observe the moon for seven hours, before, during, and after the transit so astronomers can compare the data. Astronomers need the long observation because they are looking for extremely faint spectral signatures. Only 1/100,000th of the sunlight will filter through Venus’s atmosphere and be reflected off the moon.

This is the last chance this century to view Venus passing in front of the Sun. The next transit won’t happen until 2117. Venus transits occur in pairs, separated by eight years, the last event being in 2004.