You are here: Home › Humans › News › “Seeing” auras is really synesthesia, say Euro scientists
By Will Parker on May 6, 2012 in Humans, News 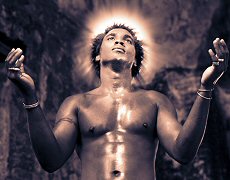 This is the first time that a scientific explanation has been provided for the esoteric phenomenon of the aura, a supposed energy field of luminous radiation surrounding a person as a halo. The study was conducted by University of Granada researchers óscar Iborra, Luis Pastor and Emilio Gómez Milán, and was published in the journalConsciousness and Cognition.

“In neurological terms, synesthesia is due to cross-wiring in the brain; in other words, synesthetes present more synaptic connections than normal people. These extra connections cause them to automatically establish associations between brain areas that are not normally interconnected,” explained Gómez Milán.

The researchers carried out the study by interviewing a number of synesthetes as well as the Spanish “healer” Esteban Sánchez Casas (also known as El Santón de Baza).

While many people attribute paranormal powers to El Santón, the researchers say it is a clear case of synesthesia. “El Santón presents face-color synesthesia [the brain region responsible for face recognition is associated with the color-processing region]; touch-mirror synesthesia [when the synesthete observes a person who is being touched or is experiencing pain, s/he experiences the same]; high empathy [the ability to feel what other person is feeling], and schizotypy [certain personality traits in healthy people involving slight paranoia and delusions]. These capacities give synesthetes the ability to make people feel understood, and provide them with special emotion and pain reading skills,” Gómez Milán said.

The researchers also note the significant placebo effect involved with healers and aura reading. “Though some healers see people’s auras and feel the pain in others due to synesthesia, [they also] have abilities and attitudes that make them believe in their ability to heal other people, but it is actually a case of self-deception, as synesthesia is not an extrasensory power, but a subjective and ‘adorned’ perception of reality,” the researchers conclude.