You are here: Home › News › Space › Earth-sized exoplanet identified
By Will Parker on December 21, 2011 in News, Space 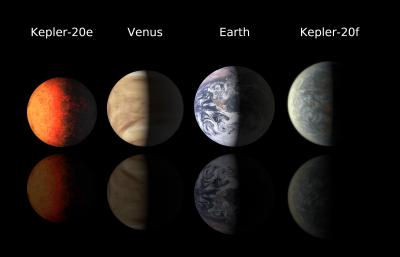 NASA’s Kepler space telescope has achieved a new milestone in its ongoing hunt for exoplanets that might resemble Earth and harbor life. Two new planets – christened Kepler-20e and 20f – are the smallest yet discovered outside our solar system. The astronomers who made the discovery say one is the same size as Earth and the other about the size of Venus. “The goal of [the] Kepler [space telescope] is to find Earth-sized planets in the habitable zone. Proving the existence of Earth-sized exoplanets is a major step toward achieving that goal,” astrophysicist Francois Fressin, from the Harvard-Smithsonian Center for Astrophysics, explained in Nature.

Kepler-20e and 20f have diameters of 6,900 miles and 8,200 miles respectively, equivalent to 0.87 times Earth (slightly smaller than Venus) and 1.03 times that of Earth. Fressin expects the worlds to have rocky compositions, so their masses should be less than 1.7 and 3 times Earth’s. Both planets orbit Kepler-20: a G-type star slightly cooler than the Sun, located 950 light-years away.

The Kepler-20 system also contains three larger planets, with all five having orbits closer to their sun than Mercury in our solar system. Interestingly, they also show an unexpected arrangement. In our solar system small, rocky worlds orbit close to the Sun and large, gas giant worlds orbit farther out. In contrast, the planets of Kepler-20 system are organized in alternating size: big, little, big, little, big. “We were surprised to find this system of flip-flopping planets,” said Fressin’s co-researcher, David Charbonneau. “It’s very different than our solar system.”

Fressin speculates that the planets of Kepler-20 could not have formed in their current locations. Instead, he believes that they must have formed farther from their star and then migrated inward, probably through interactions with the disk of material from which they all formed. This would allow the worlds to maintain their regular spacing despite alternating sizes.

Fressin was also part of the team that recently discovered a much larger planet in the Kepler-22 system orbiting its sun in what’s known as the “Goldilocks zone.” This is the region around a star where it is neither too hot, nor too cold, but just right for liquid water and therefore life to exist on the planet.

Related:
Discuss this article in our forum
Newly discovered exoplanet may be habitable
Running the numbers on alien life
First exoplanet with twin suns discovered