You are here: Home › Evolution › News › Lasting evolutionary change “slow and rare”
By Will Parker on August 23, 2011 in Evolution, News 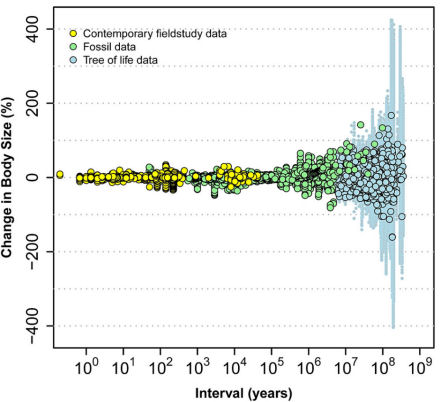 The findings show that rapid changes in local populations often don’t continue, stand the test of time or spread through a species. In other words, just because humans are two or three inches taller now than they were 200 years ago, it doesn’t mean that process will continue and we’ll be two or three feet taller in 2,000 years.

“Rapid evolution is clearly a reality over fairly short time periods, sometimes just a few generations,” explained Uyeda. “But those rapid changes do not always persist and may be confined to small populations. For reasons that are not completely clear, the data show the long-term dynamics of evolution to be quite slow.”

Across a broad range of species, Uyeda found that for a major change to persist and for changes to accumulate, it took about one million years. He adds that this occurs repeatedly in a remarkably consistent pattern. “What’s interesting is not that we have so much biological diversity and evolutionary change, but that we have so little,” he said. “It’s a paradox as to why evolution should be so slow.”

Long periods of little evolutionary change are called “stasis,” a pattern that originally led to the concept of “punctuated equilibrium,” first proposed in the early 1970s. This research supports the overall pattern of stasis and punctuational change. However, Uyeda says there may be different causal mechanisms at work than have often been proposed. “We believe that for changes to persist, the underlying force that caused them has to also persist and be widespread.”

“This isn’t just some chance genetic mutation that takes over,” he cautions. “Evolutionary adaptations are caused by some force of natural selection such as environmental change, predation or anthropogenic disturbance, and these forces have to continue and become widespread for the change to persist and accumulate. That’s slower and more rare than one might think.”