You are here: Home › Humans › News › Chick-magnet pulling power confirmed
By Will Parker on June 20, 2011 in Humans, News 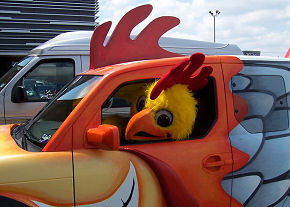 “This research suggests that conspicuous products, such as Porsches, can serve the same function for some men that large and brilliant feathers serve for peacocks,” said UTSA’s Jill Sundie, the lead author of the paper. Just as peacocks flaunt their tails before potential mates, men may flaunt flashy products to charm potential dates. Notably, not all men favored this strategy – just those men who were interested in short-term sexual relationships with women.

According to the researchers, men who chose to purchase a flashy luxury product (such as a Porsche) were more desirable than the same man who purchased a non-luxury item (such as a Honda Civic). Although women found the flashy guys more desirable for a date, they also inferred from a man’s flashy spending that he was interested in uncommitted sex.

“When women considered him for a long-term relationship, owning the sports car held no advantage relative to owning an economy car,” said co-author Daniel Beal, from Rice University. “People may feel that owning flashy things makes them more attractive as a relationship partner, but in truth, many men might be sending women the wrong message.”

While finding that men may use conspicuous consumption as a short-term mating signal, the researchers discovered that women don’t behave in the same manner and don’t conspicuously spend to attract men. “Women also spend plenty of money on expensive things,” Sundie said. “But the anticipation of romance doesn’t trigger flashy spending as it does with some men.”