You are here: Home › Humans › News › Experiments reveal aggression to be a “manhood-restoring tactic”
By Will Parker on May 3, 2011 in Humans, News 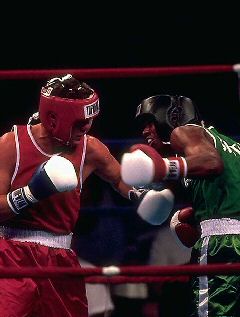 “Gender is social,” explained researcher Jennifer K. Bosson in the journal Current Directions in Psychological Science. “Men know this. They are powerfully concerned about how they appear in other people’s eyes, and the more concerned they are, the more they will suffer psychologically when their manhood feels violated. Gender role violation can be a big thing, like losing a job, or a little thing, like being asked to braid hair in a laboratory.”

Bosson and her colleagues used the hair-braiding task in several experiments to force men to behave in a “feminine” manner. In one study, some men braided hair; others did the more masculine task of braiding rope. Given the options afterwards of punching a bag or doing a puzzle, the hair-braiders overwhelmingly chose the former. When one group of men braided hair and others did not, and all punched the bag, the hair-braiders punched harder. When they all braided hair and only some got to punch, the non-punchers evinced more anxiety on a subsequent test. Aggression, concludes Bosson, is a “manhood-restoring tactic.”

Bosson also notes that people tend to feel manhood is defined by achievements, not biology, whereas womanhood is seen primarily as a biological state. Thus, manhood can be “lost” through social transgressions, whereas womanhood is “lost” only by physical changes, such as menopause. She adds that the main punishers of gender role “violations” are other men.

If Bosson is correct, the findings add weight to the notion that gender is a social, not a biological, phenomenon. They also underscore the negative effects of gender on men – depression, anxiety, low self-esteem, or violence.