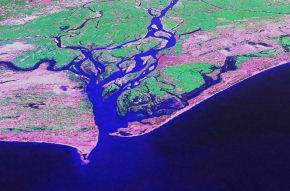 Alternately using seawater and freshwater as the electrolyte, Stanford researchers have developed a battery that takes advantage of the difference in salinity to produce electricity. According to lead research Yi Cui, the development could see river mouths or estuaries used as electricity generating power plants. Cui’s study appears in the journal Nano Letters.

As an indicator of the battery’s potential for producing power, Cui’s team calculated that if all the world’s rivers were put to use, their batteries could supply about 2 terawatts of electricity annually – around 13 percent of the world’s current energy consumption.

The battery relies on simple chemistry to function. Initially, it is filled with freshwater and a small electric current is applied to charge it up. The freshwater is then drained and replaced with seawater. Because seawater is salty, containing 60 to 100 times more ions than freshwater, it increases the electrical potential between the two electrodes. That makes it possible to reap far more electricity than the amount used to initially charge the battery. Once the discharge is complete, the seawater is drained and replaced with freshwater and the cycle begins again. 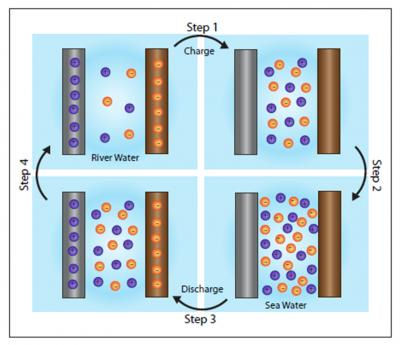 “The voltage really depends on the concentration of the sodium and chlorine ions you have,” Cui explained. “If you charge at low voltage in freshwater, then discharge at high voltage in sea water, that means you gain energy. You get more energy than you put in.”

The positive electrode of the battery is made from nanorods of manganese dioxide. That increases the surface area available for interaction with the sodium ions by roughly 100 times compared with other materials. The nanorods make it possible for the sodium ions to move in and out of the electrode with ease, speeding up the process.

In experiments, Cui’s team achieved 74 percent efficiency in converting the potential energy in the battery to electrical current, but Cui thinks with simple modifications, the battery could be 85 percent efficient. The team calculates that a power plant operating with 50 cubic meters of freshwater per second could produce up to 100 megawatts of power, about enough for 100,000 households.

In the past, other researchers have used salinity differentials to produce electricity, but those processes typically require ions to move through a membrane to generate current. Cui said those membranes tend to be fragile, which is a drawback. Those methods also typically make use of only one type of ion, while his battery uses both the sodium and chlorine ions to generate power.

Recognizing that river mouths and estuaries are environmentally sensitive areas, Cui chose manganese dioxide for the positive electrode in part because it is environmentally benign. The process itself should have little environmental impact, he explains. The discharge water would be a mixture of fresh and seawater, released into an area where the two waters are already mixing, at the natural temperature.

Now, one of Cui’s concerns is finding a good material for the negative electrode. He used silver for the experiments, but silver is too expensive to be practical.

Interestingly, Cui says that river water doesn’t necessarily have to be the source of the freshwater. “The water for this method does not have to be extremely clean. Storm runoff and gray water could potentially be useable. Even treated sewage water might work.”