You are here: Home › News › Harnessing The Coriolis Force
By Will Parker on April 20, 2008 in News 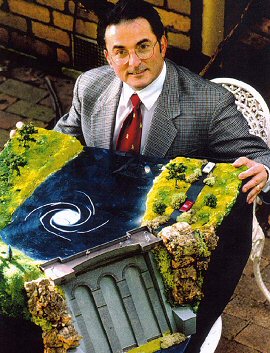 The force that creates whirlpools and hurricanes could soon be used to boost the output of traditional hydroelectric power stations by 27 percent, says Australian Paul Kouris, inventor of a new turbine that he says harnesses the vortex effect created by the rotation of the Earth.

Using the Coriolis force, the turbine is designed to harness draining water’s rotational kinetic energy, as distinct from traditional hydroelectric plants which get their motive power from water falling under gravity’s influence.

Kouris, a barrister and part-time inventor, has just secured government funding to develop a pilot installation at Marysville in eastern Victoria, Australia, after what he describes as an uphill battle to convince academia and government of the merits of his new turbine design.

The funding comes after tests conducted by the University of Ballarat, Australia, which showed that the vortex effect did indeed produce additional power beyond that provided by only the gravity-fall of water. Kouris claims that his 2004 small-scale test tank installation managed to extract an additional 27 percent energy over what is produced by traditional turbines. If his figures are correct, refurbishing existing hydraulic installations with the new turbine could radically increase their power output capabilities.

Kouris filed for a patent in 1998, but a stoush may be brewing with Austria where the town of Obergrafendorf has had Coriolis turbines operating in concrete ponds on the banks of a river since 2005.