You are here: Home › News › Laissez faire use of DDT concerns experts
By Will Parker on May 5, 2009 in News 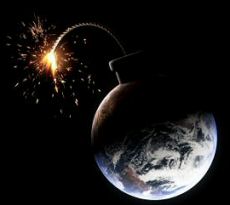 DDT’s use to combat malaria was endorsed in 2006 by the World Health Organization and the organochlorine pesticide is now sprayed inside buildings and homes throughout the developing world. But the human health impacts of DDT exposure at such high levels are unknown, say epidemiologists.

Now, a meta-review of nearly 500 epidemiological studies has been published in the journalEnvironmental Health Perspectives and, in tandem, the researchers involved have issued a consensus statement calling for increased efforts to reduce exposure to DDT, to understand the health effects of exposure to DDT, and to develop alternatives to using DDT so that other methods could ultimately be relied upon for malaria control.

Examples of non-chemical measures to control malaria include the use of bed nets, draining sources of standing water or filling them up with soil, and the rapid diagnosis and treatment of malaria cases. “We have to put our concerns in the context of people dying of malaria,” said lead author Brenda Eskenazi, UC Berkeley professor of epidemiology. “We know DDT can save lives by repelling and killing disease-spreading mosquitoes. But evidence suggests that people living in areas where DDT is used are exposed to very high levels of the pesticide. The only published studies on health effects conducted in these populations have shown profound effects on male fertility. Clearly, more research is needed… in the meantime, DDT should really be the last resort against malaria rather than the first line of defense.”

The researchers noted that the majority of studies on DDT have focused on the impact on wildlife and the environment. Of the studies published on human health, almost all have dealt with populations exposed to low, background levels of DDT. Nevertheless, some of those studies have suggested links between DDT and cancer risk, diabetes, developmental problems in fetuses and in children, and decreased fertility. “Any studies conducted up to now on the human health effects from DDT exposure may not be relevant to the populations currently exposed to the pesticide through indoor residual spraying,” said Eskenazi.

Moreover, most of the studies on DDT and human health were done in developed countries where the pesticide was banned in the 1970s, the researchers stressed. “DDT is now used in countries where many of the people are malnourished, extremely poor and possibly suffering from immune-compromising diseases such as AIDS, which may increase their susceptibility to chemical exposures,” said co-author Jonathan Chevrier.

Climate Change To Be Major Cause Of Ozone Loss