You are here: Home › News › Mothers’ exposure to insecticide linked to offspring obesity
By Will Parker on March 20, 2009 in News 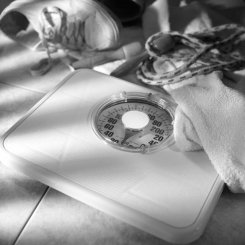 Prenatal exposure to an insecticide commonly used up until the 1970s may play a role in the obesity epidemic in women, according to Michigan State University researchers. More than 250 mothers who ate fish from Lake Michigan were studied for their exposure to DDE, a breakdown product of DDT. The study, published in Occupational and Environmental Medicine, analyzed DDE levels of the women’s offspring.

The researchers reported that compared to the group with the lowest levels, those with intermediate levels of DDE gained an average of 13 pounds excess weight, and those with higher levels gained more than 20 pounds of excess weight. “Prenatal exposure to toxins is increasingly being looked at as a potential cause for the rise in obesity seen worldwide,” said lead author Janet Osuch. “What we have found for the first time is exposure to certain toxins by eating fish from polluted waters may contribute to the obesity epidemic in women.”

In recognition of the importance of the new study, Osuch’s team has been awarded a $1 million grant to assess the impact of pollutants on a wide variety of disorders by determining the importance of second- and third-generation health effects. “This line of research can transform how we think about the causes of obesity and potentially help us create prenatal tests to show which offspring are at higher risks,” Osuch noted.

The mothers who were studied are part of a larger cohort of Michigan fish eaters along Lake Michigan who were recruited in the early 1970s. In 2000, Osuch and research partners approached the cohort and began to identify daughters aged 20 to 50 years old. “These findings not only apply to the offspring of women in our cohort but to any woman who has been exposed to high levels of DDE when she was growing in her mother’s womb,” Osuch said. “Mothers with the highest DDE levels are women who have consumed a lot of fish or high-fat meats.”