Bow To Your Insect Overlords! 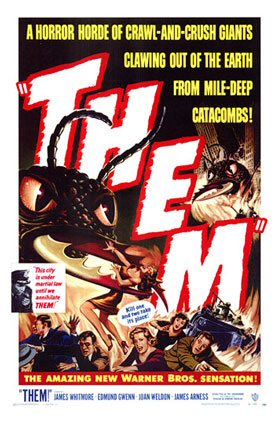 Early horror films depicting gigantic versions of insects, such as the giant ants in the 1954 film Them!, were made as tongue-in-cheek warnings about the developing nuclear age. So while we might lament horrific nuclear accidents and the threat of nuclear apocalypse, we can celebrate that we have been spared the indignity of being eaten by an oversized garden beetle. But maybe fantastic films like Them! were approaching insect domination the wrong way, and films such as the crappy, box-office bomb The Swarm were on the right track. Enormous mandible-wielding insects with wings beating a 1000-times-per-second may be unlikely during our lifetime, but climate change and evolution might just produce some creepy-crawly surprises.

Giant insects would require a special set of conditions to exist (apart from armies of pathetic human slaves). During the Paleozoic period, around 300 million years ago, insects were big... really big. If you flinch at the thought of tropical insect life, imagine running into a dragonfly with a wingspan of close to 3 feet. Big-insect boffin, Alexander Kaiser, from Midwestern University, attributes such enormous insect sizes to the concentration of oxygen in the Paleozoic atmosphere. At around 35 percent, the oxygen levels then were much higher than today's 21 percent.

Kaiser explains that it is the way that insect breathing apparatus is structured that limits them from growing any bigger today. Unlike mammals, insects rely on spiracles that channel oxygen through multiple tracheas to various parts of the body. Insects can even close these spiracles and survive on what oxygen remains in them. Try and drown an insect and you'll see how this works.

While studying large beetles, Kaiser found that the bigger the beetles got, the longer and wider the tracheas needed to be in order to efficiently transport oxygen around the body. Eventually, insect size reaches a critical point where tracheal diameter can no longer transport enough oxygen to maintain continued growth rates. "When tracheal size is limited, so is oxygen supply and so is growth," explained Kaiser. Based on his research, Kaiser calculated that today's beetles could not grow any bigger than around 15 centimeters (6 inches), which also happens to be the size of the largest beetle known, South America's Titanic longhorn beetle, Titanus giganteus. The insects living during the Paleozoic period could grow bigger than this, says Kaiser, because the greater concentration of oxygen tipped the oxygen-trachea ratio in their favor.

So, barring a dramatic rise in oxygen levels, perhaps due to a spectacular increase in terrestrial plants and algae (three-quarters of free oxygen is produced by marine algae, and one-quarter from terrestrial plants) created by a changing climate, a world filled with giant insects looks pretty remote.

More mundanely however, the exponential growth of insect numbers is well and truly on the cards if global warming continues unabated. They won't be huge in size, but there will be an awful lot of them. In fact, each day that politicians choose to ignore global warming trends, the more likely it is that we can expect sky-rocketing insect numbers in the future. According to the latest research, the thermal dependence of population growth rate for 65 insect species showed that warmer climes allow insects to flourish.

According to Frazier, the ability for insects to adapt so well to global warming will have a profound effect on the environment, and will likely alter entire ecosystems. Frazier explains that while some insect species may move to cooler regions as an avoidance strategy; "No matter which scenario plays out for a given species, local ecosystems will be profoundly altered."

And there is yet another problem that will likely compound the concerns associated with increasing insect populations. Despite the millions that died as a result of plague during the 14th and 17th centuries, people still forget that insects were responsible for spreading these diseases. But crazily, officials seem more concerned with disease carrying livestock and other large animals. "Most scientists are looking at diseases of farm animals as the biggest threat to humans. Insects are numerous and reside in close proximity to man, yet they have been generally ignored as a potential source of microbes that could be harmful for man," said University of Bath researcher Nick Waterfield.

Waterfield and his colleagues suggest that we are looking at the wrong sources for the next epidemic or pandemic. While we all wring our hands over media reports trying to beat-up cases of avian flu, Waterfield explains that insects really are a much bigger worry. "As well as passing microbes directly into our bloodstream when they bite us, insects can also act as a reservoir to 'cook up' future human diseases," says Waterfield.

"There are countless species of bacteria in insects, and sometimes they cause emerging infectious diseases by becoming harmful to people - in other words, by evolving into a new type of disease which we haven't seen before," says Waterfield. "The species of bacteria may have been around for centuries, but it is just that a new strain evolves that is suddenly able to infect humans as well as other animals."

There are also concerns about the possibility of global warming allowing disease-carrying insects to spread to previously inhabitable regions of the globe. "The picture is further complicated by climate change, which seems to be altering the range of places insects can survive and breed, bringing new insects which can carry devastating diseases such as malaria into the Northern hemisphere," explained Waterfield.

Depressingly, our defenses against these hordes of disease-carrying insects may be inadequate. Many insects have become insecticide-resistant, which not only makes them resistant to spraying, but also gives them a genetic advantage that makes them more likely to thrive than their non-resistant rivals. "We found that DDT resistance in fruit flies not only carries no cost but in fact confers an advantage when inherited through the female," said Waterfield's co-researcher, Richard ffrench-Constant. They also found that there is evidence of "cross-resistance" to other compounds, so that newer pesticides may have no effect.

Insect swarms? Pestilence? Plague? It all sounds rather biblical (sorry Mr. Dawkins). I'd hazard a guess that giant bugs would be preferable to most people. At least we might be able to farm them for food, or ride on them! But with warming trends looking like continuing unabated, we may just have a different insect nightmare to contend with.