You are here: Home › News › Penguin populations plummeting
By Will Parker on February 17, 2009 in News 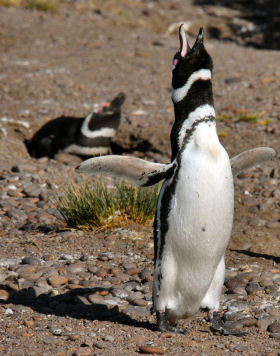 Changing weather patterns, over-fishing, pollution and other factors have conspired to drive penguin populations into a precipitous decline, according to long-term research conducted by a naturalist at the Wildlife Conservation Society (WCS). The findings were presented yesterday by University of Washington professor and WCS scientific fellow Dr. P. Dee Boersma at the American Association for the Advancement of Science annual meeting in Chicago. Boersma has been studying Magellanic penguins at Punta Tombo in Argentina for more than 25 years.

Boersma’s data reveal that penguins at Punta Tombo are traveling farther to find food than they did just a decade ago due to changing ocean conditions and overfishing – particularly of anchovies, a favorite penguin food. This has forced some penguins to attempt to nest outside of protected areas where they often fall victim to predators.

Meanwhile, changing weather patterns have also led to increased instances of heavy rains, which have caused high mortality of penguin chicks in 5 of the last 25 years.

Boersma estimates that penguin numbers at Punta Tombo have declined by more than 20 percent in the last 22 years, from 300,000 to just 200,000 breeding pairs. “Penguins are having trouble with food on their wintering grounds and if that happens they’re not going to come back to their breeding grounds,” she said.

She added that of the world’s 17 species of penguin, 12 are rapidly declining. “If we continue to fish down the food chain and take smaller and smaller fish like anchovies, there won’t be anything left for penguins and other wildlife that depend on these small fish for food,” she warned.