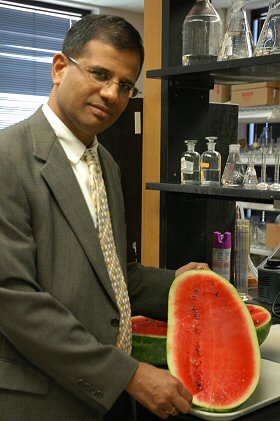 Scientists from Texas A&M’s Fruit and Vegetable Improvement Center say that watermelon has ingredients that deliver Viagra-like effects to the body’s blood vessels and may even increase libido. “The more we study watermelons, the more we realize just how amazing a fruit it is in providing natural enhancers to the human body,” said A&M’s Dr. Bhimu Patil (pictured). “We’ve always known that watermelon is good for you, but the list of its very important healthful benefits grows longer with each study.”

Beneficial ingredients in watermelon and other fruits and vegetables are known as phyto-nutrients, naturally occurring compounds that are bioactive, or able to react with the human body to trigger healthy reactions. In watermelons, these include lycopene, beta carotene and citrulline – whose beneficial functions are now being unraveled. Among them is the ability to relax blood vessels, much like Viagra does.

Scientists know that when watermelon is consumed, citrulline is converted to arginine through certain enzymes. “The citrulline-arginine relationship helps heart health, the immune system and may prove to be very helpful for those who suffer from obesity and type 2 diabetes,” said Patil. “Arginine boosts nitric oxide, which relaxes blood vessels, the same basic effect that Viagra has, to treat erectile dysfunction and maybe even prevent it. Watermelon may not be as organ specific as Viagra but it’s a great way to relax blood vessels without any drug side-effects.”

Arginine also helps the urea cycle by removing ammonia and other toxic compounds from our bodies. Citrulline, the precursor to arginine, is found in higher concentrations in the rind of watermelons than the flesh. As the rind is not commonly eaten, two of Patil’s fellow scientists, Steve King and Hae Jeen Bang, are working to breed new varieties with higher concentrations in the flesh.

The new research has also shown that deep red varieties of watermelon have displaced the tomato as the richest source of lycopene. Patil said that while 92 percent of watermelon is water, the remaining 8 percent is loaded with lycopene, an anti-oxidant that protects the human heart, prostate and skin health. “Lycopene, which is also found in red grapefruit, was historically thought to exist only in tomatoes,” he said. “But now we know that it’s found in higher concentrations in red watermelon varieties.”

Related:
Up, Up And Away For Athletes Taking Viagra
Big Rise In Young Men Using Viagra
Endangered Species Get A Lift From Viagra