You are here: Home › News › Chinese Herbal Remedy Set To Tackle Cancer
By Will Parker on October 20, 2004 in News 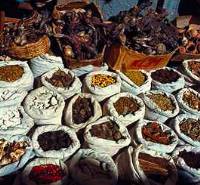 A group of cancer-fighting compounds derived from a substance used in ancient Chinese medicine will be developed for potential use in humans. The compounds, all developed through the research of University of Washington (UW) scientists Henry Lai, Narendra Singh and Tomikazu Sasaki, make use of a substance known as artemisinin, found in the wormwood plant and used throughout Asia since ancient times to treat malaria. Although the compounds are promising, potential medical applications are still years away, officials say.

The University of Washington will be developing possible treatments in conjunction with Chongqing Holley Holdings, a Chinese company, and Holley Pharmaceuticals, its U.S. subsidiary. “We are very excited about the UW’s discovery and an opportunity to develop an artemisinin-based cancer drug,” Kevin Mak of Holley, said. “The technology is very promising, but it’s in its early stages.”

Researcher Henry Lai said he became interested in artemisinin about 10 years ago. Artemisinin helps control malaria because it reacts with the high iron concentrations found in the single-cell malaria parasite. When artemisinin comes into contact with iron, a chemical reaction ensues, spawning charged atoms that chemists call “free radicals.” The free radicals attack the cell membrane and other molecules, breaking it apart and killing the parasite. Lai wondered if the process might work with cancer, too.

“Cancer cells need a lot of iron to replicate DNA when they divide,” Lai said. “As a result, cancer cells have much higher iron concentrations than normal cells. When we began to understand how artemisinin worked, I started wondering if we could use that knowledge to target cancer cells.” Perhaps the most promising of the methods licensed involves the use of transferrin, to which the researchers bind artemisinin at the molecular level. Transferrin is an iron-carrying protein found in blood, and is transported into cells via transferrin receptors on a cell’s surface. Iron-hungry cancer cells typically have significantly more transferrin receptors on their surface than normal cells, which allows them to take in more of the iron-carrying protein. That, says Lai, is what seems to make the compound so effective. “We call it a Trojan horse because a cancer cell recognizes transferrin as a natural, harmless protein and picks up the tagged compound without knowing that a bomb – artemisinin – is hidden inside.”

Once inside the cancer cell, the iron is released and reacts with the artemisinin. That makes the compound both highly toxic and, because of cancer’s rapacious need for iron, highly selective. Surrounding, healthy cells are essentially undamaged. “Our research in the lab indicated that the artemisinin-tagged transferrin was 34,000 times more effective in selecting and killing the cancer cells than normal cells,” Lai said. “Artemisinin alone is 100 times more effective, so we’ve greatly enhanced the selectivity.”

New Slant On Solar Sail
Male Scientists Not So Manly