You are here: Home › News › Magnolia Compound Targets Cancer Switch
By Will Parker on July 14, 2008 in News 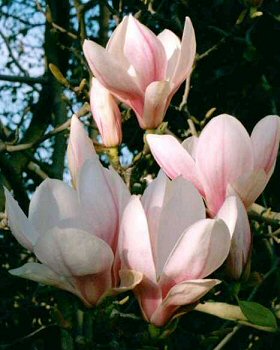 Emory University School of Medicine researchers say that a natural compound from magnolia blocks a pathway for cancer growth that was previously considered “undruggable.” Research team leader Jack Arbiser has been studying honokiol (the active compound from the magnolia cone) since discovering its ability to inhibit tumor growth in mice in 2003. Arbiser’s team’s findings were published in the journal Clinical Cancer Research.

“Knowing more about how honokiol works will tell us what kinds of cancer to go after,” said Arbiser. “We found that it is particularly potent against tumors with activated Ras.” Ras refers to a family of genes whose mutation stimulates the growth of several types of cancers. Although the Ras family is mutated in around a third of human cancers, medicinal chemists have considered it an intractable target.

Honokiol’s properties could make it useful in combination with other antitumor drugs, because blocking Ras activation would prevent tumors from escaping the effects of these drugs, Arbiser explained. “Honokiol could be effective as a way to make tumors more sensitive to traditional chemotherapy,” he noted.

One of the effects of Ras is to drive pumps that remove chemotherapy drugs from cancer cells. In breast cancer cell lines with activations in Ras family genes, honokiol appears to prevent Ras from turning on an enzyme called phospholipase D. It also has similar effects in lung and bladder cancer cells in the laboratory. Phospholipase D provides what have come to be known as “survival signals” in cancer cells, allowing them to stay alive when ordinary cells would die.

Emory University is in the process of licensing honokiol and related compounds so that they can be tested in people in cooperation with industry partners.

Obesity Linked To Abnormal Sperm
Watermelon: The Fruit Of Love