You are here: Home › News › Oxygen Resuscitation In ER Damages Brain Function
By Will Parker on May 22, 2007 in News 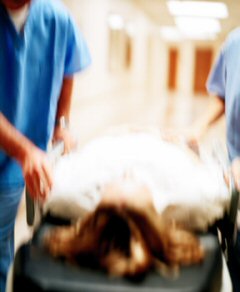 Slapping an oxygen mask onto a patient’s face is de rigeur for television medicos, but new research suggests that inhaling straight oxygen can actually harm the brain.

A worrying new brain-imaging study, carried out by UCLA researchers and published in the Public Library of Science (PLoS) Medicine, directly contradicts medical practice guidelines by recommending the addition of carbon dioxide to the gas mix to preserve brain function in patients.

“For decades, the medical community has championed 100 percent oxygen as the gold standard for resuscitation. But no one has reported what happens inside our brains when we inhale pure oxygen,” explained UCLA’s Ronald Harper. “What we discovered adds to a compelling body of evidence for modifying a widely practiced standard of care in the United States.”

Using functional magnetic resonance imaging (fMRI), the researchers captured detailed pictures of what occurs inside the human brain during two different breathing scenarios. They scanned the brains and monitored the breathing and heart rates of 14 healthy children, aged between 8 and 15, as they inhaled 100 percent oxygen. Later, they repeated the experiment with 5 percent carbon dioxide added to the gas mixture. The two scans revealed dramatic differences.

“When the children inhaled pure oxygen, their breathing quickened, resulting in the rapid exhalation of carbon dioxide from their bodies,” explained researcher Paul Macey. “The drop in carbon dioxide narrowed their blood vessels, preventing oxygen from reaching tissue in the brain and heart.” At that point, the MRI scan showed three brain structures suddenly lighting up: the hippocampus, which helps control blood pressure; the cingulate cortex, which regulates pain perception and blood pressure; and the insula, which monitors physical and emotional stress.

This activity awakened the hypothalamus, which regulates heart rate and hormonal outflow. Activation of the hypothalamus triggered a cascade of harmful reactions and released chemicals that can injure the brain and heart.

“Several brain areas responded to 100 percent oxygen by kicking the hypothalamus into overdrive,” explained Harper. “The hypothalamus overreacted by dumping a massive flood of hormones and neurotransmitters into the bloodstream. These chemicals interfere with the heart’s ability to pump blood and deliver oxygen – the opposite effect you want when you’re trying to resuscitate someone.”

When the children inhaled the carbon dioxide-oxygen mix, the hypothalamus’ hyperactivity vanished from the MRI scan. “Adding carbon dioxide to the oxygen relaxed the blood vessels, allowed oxygen to reach the heart and brain, calmed the hypothalamus and slowed the release of dangerous chemicals,” said Macey.

The researchers say that healthcare providers should urgently consider adding carbon dioxide to oxygen dispensation, especially when resuscitating infants or administering oxygen for more than a few minutes. The new findings could also hold particular implications for patients of stroke, heart attack, carbon monoxide poisoning and any long-term oxygen therapy.

“When in doubt about a case, the current medical approach is to increase oxygen levels and wait to see if the patient improves. [But] pure oxygen kindles the match that fuels a forest fire of harm to the body,” concluded Harper.

Related articles:
Ozone – The Pollutant That Got Away
The Ten Scariest Medical Mishaps
The Dummies Guide To Mind Reading

Getting A Handle On Spintronics
Chernobyl Fungus Feeds On Radiation