You are here: Home › News › Galactic Cluster Collision Sheds Light On Dark Matter
By Will Parker on May 16, 2007 in News 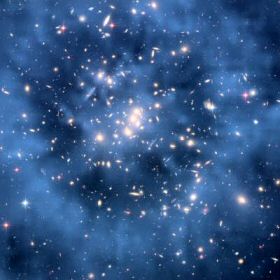 The invisible substance known as dark matter is thought to provide the additional gravitational force that stops galaxies from flying apart. Although astronomers don’t know what dark matter is made of, they hypothesize that it is a type of elementary particle that pervades the universe. Despite its profound effects throughout the universe, tracing and observing dark matter is notoriously difficult. It does not shine or reflect light and astronomers can only detect its influence by how its gravity affects light.

Now, thanks to a collision of galactic clusters, astronomers have been provided with an unprecedented opportunity to observe the behavior of dark matter largely unhindered by other factors. Using the Hubble Space Telescope, the team from Johns Hopkins have reported the discovery of a ring of dark matter in the galaxy cluster ZwCl0024 1652 (composite Hubble image appears above). The ring measures 2.6 million light-years across and is located 5 billion light-years away.

“This is the first time we have detected dark matter as having a unique structure that is different from the gas and galaxies in the cluster,” said astronomer M. James Jee, a member of the team that spotted the dark matter ring. “Although the invisible matter has been found before in other galaxy clusters, it has never been detected to be so largely separated from the hot gas and the galaxies that make up galaxy clusters,” Jee continued. “By seeing a dark matter structure that is not traced by galaxies and hot gas, we can study how it behaves differently from normal matter.”

Curious about why the ring was in the cluster and how it had formed; Jee found previous research that suggested the cluster had collided with another cluster 1 to 2 billion years ago. Fortuitously, astronomers have a head-on view of the collision because it occurred along Earth’s line of sight, giving the structure the appearance of a ring.

Using computer simulations, the astronomers showed that as the two clusters smash together, the dark matter falls to the centre of the combined cluster and “sloshes” back out. As the dark matter moves outward, it begins to slow down under the pull of gravity and pile up, forming the distinctive ring shape.

“The collision between the two galaxy clusters created a ripple of dark matter which left distinct footprints in the shapes of the background galaxies,” Jee explained. “It’s like looking at the pebbles on the bottom of a pond with ripples on the surface. The pebbles’ shapes appear to change as the ripples pass over them. So, too, the background galaxies behind the ring show coherent changes in their shapes due to the presence of the dense ring.”