You are here: Home › News › Hubble Locates Gaggle Of Baby Galaxies
By Will Parker on September 22, 2006 in News 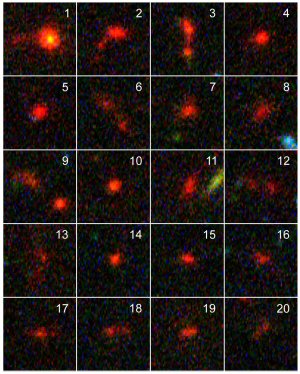 NASA’s Hubble Space Telescope has revealed a trove of 500 infant galaxies, formed around one billion years after the big bang. The astronomers involved say the sample represents the most comprehensive compilation of galaxies in the early universe and could add significantly to our understanding of the origin of galaxies, which only a decade ago was largely a matter of guesswork.

The newly unveiled galaxies are smaller than today’s giant galaxies and very bluish in color, indicating rigorous star birthing. The galaxies appear red in images because of their tremendous distance from Earth; their light taking nearly 13 billion years to reach us. During this journey, the blue light was shifted to red light due to the expansion of space. “Finding so many of these dwarf galaxies, but so few bright ones, is evidence for galaxies building up from small pieces – merging together as predicted by the hierarchical theory of galaxy formation,” said astronomer Rychard Bouwens, who led the research team.

“Seeing all of these starburst galaxies provides evidence that there were enough galaxies 1 billion years after the Big Bang to finish reheating the universe,” explained team member Garth Illingworth. “It highlights a period of fundamental change in the universe, and we are seeing the galaxy population that brought about that change.”

The universe’s reheating, driven by the galaxies’ ultraviolet starlight, transformed the gas between galaxies from a cold, dark hydrogen soup to a hot, transparent plasma over only a few hundred million years. With Hubble’s help, astronomers are now beginning to see the kinds of galaxies that brought about the reheating.

Uncovering these new galaxies has only whetted the appetites of the astronomers involved, who believe that many more even younger galaxies at even greater distances are awaiting discovery; probably with the help of the James Webb Space Telescope (JWST), scheduled to launch in 2013. “With JWST, we will probe the dawn of galaxy formation to see the imprint of the first objects to form in the universe,” Illingworth said.