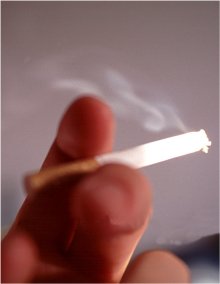 An article in the journal Sexually Transmitted Infectionssuggests that smokers may be unwittingly modifying their immune systems, making them more vulnerable to infection by the HIV virus. Past studies have found that cigarette smoking is linked to a higher than normal chance of contracting other infections generally, including those that have been sexually transmitted.

“The consistency of the findings is striking and represents a major strength of this review,” say the researchers, adding: “while the studies vary in quality, they include reports of high quality investigations using large sample sizes.” The researchers speculate that tobacco smoke may enhance vulnerability to infection by modifying the structure of the lungs and changing an array of immune system responses, including curbs on the production of antibodies and the activity of infection fighting white cells.

While these new findings suggest that smokers may to some extent be putting out the welcome mat for HIV, the researchers haven’t investigated other salient factors which might also influence a smoker’s risk for HIV. Such investigations might include studies which have shown a strong association between smoking, dementia and mental illness; and others that have examined the link between sexual function and smoking. Despite these limitations, the authors suggest, perhaps not unsurprisingly, that encouraging people to give up smoking may also contribute to the effectiveness of HIV/AIDS prevention programs.

Fat Gets A Makeover
Hubble Locates Gaggle Of Baby Galaxies