You are here: Home › News › Satellites Catch Earth Reconfiguring Its Magnetic Field
By Will Parker on July 20, 2006 in News 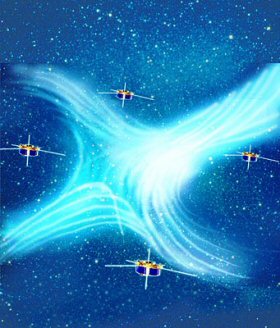 Scientists at the European Space Agency (ESA) have managed to perfectly position their 4 Cluster spacecraft so as to measure the Earth’s magnetic field spontaneously reconfiguring itself. The process, called magnetic reconnection, is a transitional phase involving the interaction of plasma filled magnetic “bubbles,” and is thought to be responsible for driving a variety of extremely powerful celestial phenomena. This is the first time that magnetic reconnection has been observed, and the data collected from the mission, appearing in Nature Physics, will be invaluable to astronomers and nuclear scientists. 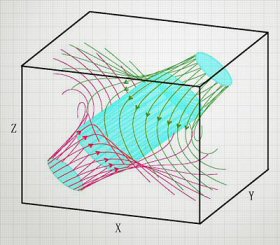 With this knowledge, scientists have calculated that a 3 dimensional zone must exist at the center of where the magnetic fields break and reconnect, a theoretical region known as the null point. Until now, scientists haven’t been able to identify the null point, because at least 4 simultaneous coordinates of measurement are needed.

ESA scientists finally got their big break in September of 2001, when 4 Cluster craft – flying in tetrahedral formation – passed behind the Earth. The craft were flying 1000 kilometers apart from one another as they flew through the Earth’s magnetotail (stretching out behind the nighttime side of our planet), and managed to surround a suspected null point. Data received from the Cluster craft was then analyzed by an international team of scientists led by Dr. C. Xiao, from Chinese Academy of Sciences, Professor Pu from Peking University, and Professor Wang from Dalian University of Technology.

The team managed to identify and reconstruct the dimensions of the null point, but they were surprised by what they found. The data showed that the null point resides in a previously unheard of vortex structure measuring 500 kilometers across. “This characteristic size has never been reported before in observations, theory or simulations,” say the researchers. The team added that further null point observations are required to determine whether the processes that they observed were anomalous or common to all magnetic reconnections.

The reconnection process is suspected of driving many powerful phenomena in our Solar System, such as radiation jets escaping from black holes, and tremendously powerful solar flares. Less dramatically, but no less awe-inspiring, magnetic reconnection on the dayside of the planet’s magnetic field lets in solar gas, which produces a particular type of aurora called a “proton aurora.”

Magnetic Fields May Be “Visible” To Birds