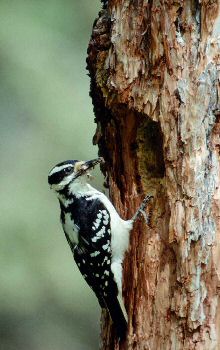 Migratory birds, as well as many other animals, are able to sense the magnetic field of the earth, but how do they do it? “A fascinating possibility is that they may actually see the earth’s magnetic lines as patterns of color or light intensity superimposed on their visual surroundings,” said John B. Phillips at Virginia Tech.

A paper in Nature, “Resonance effects indicate a radical-pair mechanism for avian magnetic compass,” reports evidence that the earth’s magnetic field is sensed by light-absorbing molecules in the retina of a bird’s’ eye.

Any effect of the earth’s magnetic field on a photoreceptor’s response to light is expected to be extraordinarily weak – so weak in fact that the possibility of such effects have been largely ignored. But animals have developed specialized visual systems. “Some animals can see ultraviolet light. Some animals can see polarized light,” Phillips said.

How animals’ nervous systems become adapted to detect different things is the subject of Phillips’ research. “As a biologist interested in specialized sensory systems, the question of whether photoreceptors have become specialized for detection of the earths’ magnetic field is a fascinating topic,” he said.

Are magnetic sensing and light sensing related? Phillip’s lab has conducted research that has demonstrated that the magnetic “compass” sense involves a light-dependent mechanism in some animals. In earlier papers published in Nature, Phillips’ lab showed that changing the color of light altered directional information obtained from the magnetic compass in amphibians, and that the photoreceptors responsible were not located in the eyes, but in the pineal organ, or “third eye,” located on top of the head.

For a photoreceptor to detect light, a molecule, referred to as a photopigment, has to absorb light, Phillips said. Light energy then starts a series of biochemical events that result in a change in the electrical charge across the cell membrane. This neural impulse can then be communicated to other cells in the nervous system.

Several theoretical models, including models proposed by lead author Thorsten Ritz and Klaus Schulten have suggested ways in which the magnetic field can interact with a photopigment to divert energy and make the photoreceptor more or less responsive to light, Phillips said. These changes in the response to light may depend on the alignment of the earth’s magnetic field relative to the photopigment molecules in the eye, producing a “visual” pattern that could be used to obtain directional information from the magnetic field, he said.

Although the earlier studies by Phillips and others indicated that birds and amphibians’ magnetic compass involves a light-dependent magnetic detector, these findings did not provide convincing evidence that the magnetic field was having a direct effect on the energy states of the photopigment molecules, as suggested in the models by Ritz and Schulten. An alternative suggested by other investigators is that the magnetic field might affect particles of the mineral magnetite, synthesized by living systems, which act like miniature compass needles.

The new experiments reported in the May 13 issue of Nature took advantage of the fact that migratory birds held in “orientation cages” during their normal seasonal migrations use the magnetic field as a source of compass information to hop in the appropriate migratory direction. To distinguish between the photoreceptor and magnetite mechanisms, European robins orienting to the north during the Spring migration were exposed to low-level radio frequencies predicted to disrupt the energy states of any light-absorbing molecules involved in sensing the magnetic field. In the presence of the radio frequency fields, the robins were unable to orient with respect to the magnetic field. This effect was also shown to depend on the alignment of the radio frequency field relative to the earth’s magnetic field, a further prediction of Ritz and Schulten’s model. Alternative mechanisms that involve the alignment of magnetite particles, rather than changes in the energy states of molecules within these particles, would not be affected by the low-level radio frequency fields used in these experiments.

“This is the first data to show that an effect of the magnetic field on energy states of a molecule is the basis of the magnetic compass,” Phillips said. “The importance of this finding extends beyond this field of research, because it suggests that interactions much weaker than any thought to be possible in living systems are playing an important role in the behavior of these animals”.

Virginia Tech researchers are currently carrying out related experiments to characterize the biophysical basis of the magnetic compass in insects, amphibians, and mice.