You are here: Home › News › Graphene stress produces gigantic pseudo-magnetic fields
By Will Parker on July 30, 2010 in News 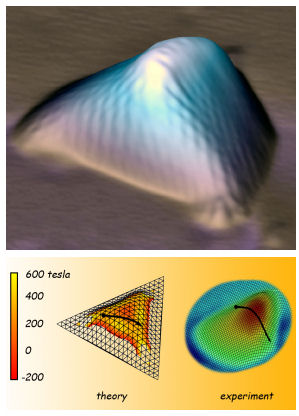 Researchers have reported the creation of pseudo-magnetic fields far stronger than the strongest magnetic fields ever sustained in a laboratory – just by putting the right kind of strain onto a patch of graphene (a sheet made from a single layer of carbon atoms). The finding, reported in Science, adds to graphene’s growing list of experimental surprises.

“We have shown experimentally that when graphene is stretched to form nanobubbles on a platinum substrate, electrons behave as if they were subject to magnetic fields in excess of 300 tesla, even though no magnetic field has actually been applied,” says Michael Crommie, from Berkeley National Laboratory. “This is a completely new physical effect that has no counterpart in any other condensed matter system.”

Previously, it was difficult to sustain tremendously strong magnetic fields in a laboratory setting. The current record is 85 tesla for a field that lasts only thousandths of a second. When stronger fields are created, the magnets blow themselves apart.

The ability to make electrons behave as if they were in magnetic fields of 300 tesla or more – just by stretching graphene – offers a new window on fundamental science made possible by graphene’s electronic behavior, which is unlike any other material’s.

Crommie explained that a carbon atom has four valence electrons; in graphene, three electrons bond in a plane with their neighbors to form a strong hexagonal pattern, like chicken-wire. The fourth electron sticks up out of the plane and is free to hop from one atom to the next. These electrons (known as pi-bond electrons) act as if they have no mass at all and can move at almost one percent of the speed of light.

The idea that a deformation of graphene might lead to the appearance of a pseudo-magnetic field first arose even before graphene sheets had been isolated, in the context of carbon nanotubes (which are simply rolled-up graphene). In early 2010, theorist Francisco Guinea of the Institute of Materials Science of Madrid developed these ideas and predicted that if graphene could be stretched along its three main crystallographic directions, it would effectively act as though it were placed in a uniform magnetic field. This is because strain changes the bond lengths between atoms and affects the way electrons move between them. The pseudo-magnetic field would reveal itself through its effects on electron orbits.

Describing the discovery, Crommie says, “We had the benefit of a remarkable stroke of serendipity.” Crommie’s research group had been using a scanning tunneling microscope to study graphene monolayers grown on a platinum substrate. A scanning tunneling microscope works by using a sharp needle probe that skims along the surface of a material to measure minute changes in electrical current, revealing the density of electron states at each point in the scan while building an image of the surface.

Crommie was meeting with a visiting theorist from Boston University, Antonio Castro Neto, about a completely different topic when a research team member came into his office with the latest data. “It showed nanobubbles, little pyramid-like protrusions, in a patch of graphene on the platinum surface,” Crommie says, “and associated with the graphene nanobubbles there were distinct peaks in the density of electron states.” Crommie says his visitor, Castro Neto, took one look and said, “That looks like the Landau levels [where constructive interference occurs in an orbiting electron’s quantum wave function] predicted for strained graphene.”

“Getting the right strain resulted from a combination of factors,” Crommie says. “To grow graphene on the platinum we had exposed the platinum to ethylene and at high temperature the carbon atoms formed a sheet of graphene whose orientation was determined by the platinum’s lattice structure.”

To get the highest resolution from the scanning tunneling microscope, the system was then cooled to a few degrees above absolute zero. Both the graphene and the platinum contracted – but the platinum shrank more, with the result that excess graphene pushed up into bubbles, measuring four to 10 nanometers across and from a third to more than two nanometers high.

To confirm that the experimental observations were consistent with theoretical predictions, Castro Neto worked with Guinea to model a nanobubble typical of those found by the Crommie group. The resulting theoretical picture was a near-match to what the experimenters had observed: a strain-induced pseudo-magnetic field some 200 to 400 tesla strong in the regions of greatest strain, for nanobubbles of the correct size.

The opportunities for basic science with strain engineering are huge, says Crommie. “Controlling where electrons live and how they move is an essential feature of all electronic devices. New types of control allow us to create new devices, and so our demonstration of strain engineering in graphene provides an entirely new way for mechanically controlling electronic structure in graphene. The effect is so strong that we could do it at room temperature.”