You are here: Home › News › Giant Parasol To Help Image Distant Planets
By Will Parker on July 6, 2006 in News 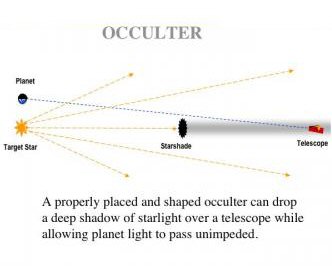 Astronomers could soon be using a gigantic space-parasol to block out starlight that interferes with the view of planets in other solar systems. The daisy-shaped space shield could be used in conjunction with an orbiting telescope to get clear images of the more than 175 planets that have been discovered orbiting other stars, say the authors of a University of Colorado at Boulder (CU) study, just published in Nature.

Made of thin plastic, the “starshade” would allow a telescope trailing thousands of miles behind it to image light from distant planets skimming by the giant petals without being swamped by light from the parent stars, explained CU’s Professor Webster Cash. This would allow astronomers to then identify planetary features like oceans, continents, polar caps and cloud banks and even detect biomarkers like methane, oxygen and water if they exist.

“We think this is a compelling concept, particularly because it can be built today with existing technology,” said Cash. “We will be able to study Earth-like planets tens of trillions of miles away and chemically analyze their atmospheres for signs of life.”

It’s envisaged that the telescope and starshade – dubbed the New Worlds Imager – would be launched together into an orbit roughly 1 million miles from Earth. The starshade would then be unfurled and small thrusters would move it into the lines of sight of nearby stars thought to harbor planets. The thrusters would be intermittently turned on to hold the starshade steady during the observations of the planets, which would appear as bright specks. The paper includes solutions to optical challenges like the bending and scattering of light between the pliable, 50-yard-in-diameter starshade and the space telescope, which would orbit in tandem roughly 15,000 miles apart.

Other proposals for imaging distant planets involve suppressing parent starlight once it has entered the telescope – an enormously complicated exercise. “In contrast, this is a very clean and simple optical concept, and may be the most promising idea yet on how to directly image our Earth-like neighbors,” said Marc Kuchner, of NASA’s Goddard Space Flight Center’s Exoplanets and Stellar Astrophysics Laboratory.

An even more advanced version of the imaging system might involve a ring of telescopes placed on the moon beneath a fleet of orbiting starshades that would allow scientists to actually photograph distant, Earth-like planets, Cash speculated. “There is a bit of Buck Rogers in the New Worlds Imager concept, but seeking and mapping new lands is something that seems to ring deep in the human psyche.”