You are here: Home › News › Saturn’s Rings Giving Up Some Of Their Secrets
By Will Parker on July 7, 2006 in News 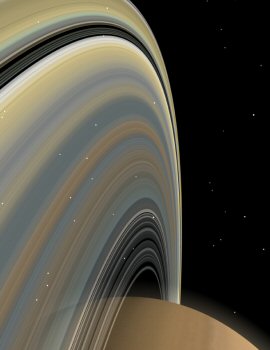 As Cassini beams back a sequence of new images, NASA imaging team members are receiving yet more clues about the formation and structure of Saturn’s G and E rings. The team has confirmed that a bright arc located on the inside edge of the G ring seems to be an established feature, which may be held in position by a nearby moon that also influences Neptune’s rings. This latest series of images are of a resolution not previously seen, but the new clarity appears to raise more questions than it answers.

Viewed as a short film, Cassini’s latest images show an arc of illuminated material winding its way around the inside edge of Saturn’s G ring. First viewed during Cassini’s orbit insertion, the G ring is a 4,400-mile wide band of icy dust particles that lies 16,800 miles beyond the F ring. The team had already seen the G ring’s arc in 2005, but this latest viewing seems to confirm that the arc is a permanent fixture. “We have seen the arc a handful of times over the past year,” said Dr. Matt Hedman, Cassini imaging team associate working at Cornell University in Ithaca, New York. “It always appears to be a few times brighter than the rest of the G ring and very tightly confined to a narrow strip along the inside edge of the ‘normal’ G ring.”

The team thinks that the arc feature may have remained due to some resonant influence of the moon Mimas, which is also responsible for Neptune’s ring arcs. “We’ve known since the days of Voyager that we had Jovian-type and Uranian-type rings within the rings of Saturn,” said Cassini imaging team leader Dr. Carolyn Porco in Boulder, Colorado, who was the first to discover the dynamics of the Neptunian arcs based on Voyager’s observations. “Now it appears that Saturn may be home to Neptunian-type rings as well. Saturn’s rings have it all!”

The team is still unsure how the bright arc formed, but one hypothesis is that a cloud of fine particles formed after the collision of icy, meter-sized objects, which later came under the influence of Mimas. But this theory raises more questions than it answers, as it suggests that the main G ring could be the result of particles seeping from and drifting out from the arc.

The team also had some prior speculations confirmed in regard to Saturn’s E ring. Using enhanced, high-resolution imaging, the team showed that there was indeed a relationship between Enceladus’s south polar geysers and Saturn’s E ring particles. Cassini was positioned in relation to Saturn so that the ring was viewed edge-on, giving the ring a double-banded effect. This effect can occur when the particles circling Saturn are on inclined and restricted orbits; an effect also associated with Jupiter’s gossamer ring. The reason for this special circumstance is not exactly known, but it could be the result of two factors. The first hypothesis is that the restricted particle orbits may be determined by the velocity at which they are ejected out of Enceladus. The second possibility is that while particles may begin with a large range of orbits, those orbiting very close to the ring plane get gravitationally scattered and removed from that region.

The team hopes that more clues will be forthcoming after the next imaging run of Saturn’s G and E rings. Further studies will incorporate observational and dynamical models that should explain many of the questions raised by the current images. “We’ll want images from a few other vantage points to be sure of the structure, and then we can test several models to see why these ring particles end up in such a distinct configuration,” said Cassini imaging team member Dr. Joseph Burns, also of Cornell.